MANILA, Philippines — The Department of Foreign Affairs (DFA) confirmed Friday that there were three Filipinos onboard the Malaysian airplane that was shot down in eastern Ukraine and said that they were working to get more information.

“We confirm that there were 3 Filipinos on board MH17 based on information released by Malaysian and Dutch authorities,” DFA spokesman Charles Jose said in a text message.

“Names of passengers have yet to be released. Our Philippine Embassies in Malaysia and Netherlands are coordinating with authorities and Malaysian Airlines on securing more information,” he said. 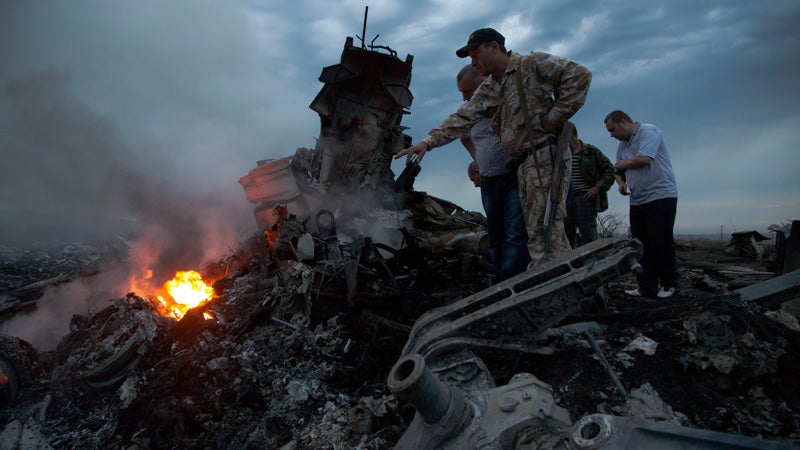 People inspect the crash site of a passenger plane near the village of Hrabove, Ukraine, Thursday, July 17, 2014. Ukraine said a passenger plane was shot down Thursday as it flew over the country, and both the government and the pro-Russia separatists fighting in the region denied any responsibility for downing the plane. (AP Photo/Dmitry Lovetsky)

The plane was carrying 283 and 15 crew members and was heading to Kuala Lumpur, Malaysia from Amsterdam.

Among the passengers, 154 were Dutch, 27 were Australians, 23 were from Malaysia, 11 were Indonesian, six were British, four were German, another four were from Belgium, three were from the Philippines and one was Canadian.

Rebels in the eastern Ukrainian village were allegedly responsible for shooting down the airplane.

Malaysia plane shot down over Ukraine; 3 Filipinos among passengers