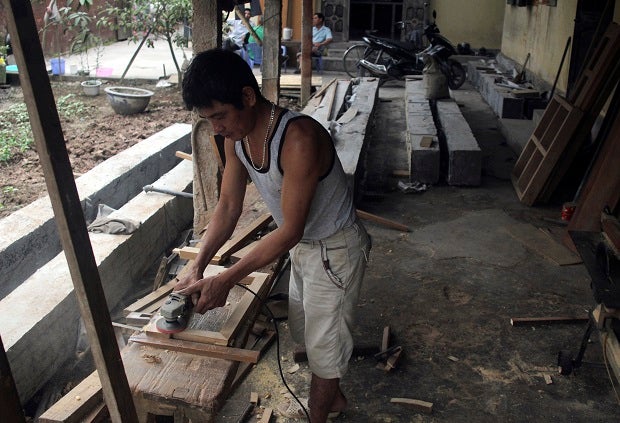 In this photo taken April 17, 2014, Pham Duc Viet works in his carpentry shop in Vu Hoi, Vietnam. Nine years ago, when Viet’s wife moved to Taiwan to work as a maid, he took over her household chores and childcare responsibilities. Now his double duty is second nature. “There are lots of other guys around here who do the same thing,” he said, adding that his wife plans to return home for good this year. AP

VU HOI, Vietnam — When his wife moved to Taiwan nine years ago to work as a maid — earning far more than she could in the rice paddies of this northern Vietnamese hamlet — Pham Duc Viet took over the household chores and raised their two children on top of his regular work as a farmer and carpenter.

Now, the double duty is second nature for Viet, 48, as it with many male neighbors. Hundreds of women have left the village of Vu Hoi, 120 kilometers (75 miles) south of Hanoi, to take better-paying jobs in Taiwan, Japan and South Korea and send money home, part of a wider migration of female labor from Vietnam over the past 15 years.

“Not a big deal,” Viet said of the extra chores. “I’m willing to sacrifice so that my kids can have a better life.” His wife’s earnings are covering university tuition for their two children and paid for a furniture workshop next to their house. 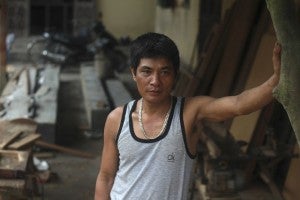 As more women leave the country, Vietnam is following a trend seen in other Asian nations such as Indonesia, the Philippines and Sri Lanka, where women make up at least two-thirds of workers who leave the country. Vietnamese women accounted for about a third of migrant workers in 2011, according to the United Nations.

Working as maids or nurses overseas, women can often earn more than men doing manual labor such as construction or farming.

The trend has left behind legions of what experts call “father-carers,” many of them in countries with previously well-defined gender roles regarding housework and child-rearing.

The changes have contributed to some social problems in Vietnam, and domestic media reports have portrayed Vu Hoi as a village where many “left-behind” fathers have turned to drugs, alcohol and prostitutes.

Fathers interviewed in the village and in nearby Vu Tien said that while that may be true in some cases, the reports were exaggerated. Most men were willing to take on the additional work to support their families.

Preparing meals was a challenge, some said, but never an insurmountable one. 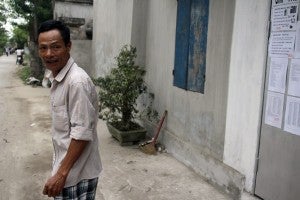 In this AP photo taken April 17, 2014, rice farmer Vu Duc Hang stands outside his home in Vu Hoi, Vietnam. Since 2004, Hang’s wife has lived in Taiwan as a domestic helper, and for years he shared the cooking and cleaning duties with his two children, who later went to college.  AP

“In a farming family like ours, dinners are pretty simple anyway,” said Vu Duc Hang, whose two children helped with the cleaning and cooking when they were at home. Now they too have been able to attend college.

There are few comprehensive studies on father-carers, and scholars say the social and psychological effects of female labor migration on Asian societies are still far from clear.

Some migration studies of Southeast Asian communities have found that female relatives typically took over child-rearing responsibilities when mothers left for jobs abroad.

But a 2008 survey that tracked about 1,100 migrant-mother households in Vietnam and Indonesia reported that more than two-thirds of primary caregivers were fathers — a sharp contrast to earlier findings in the Philippines and Sri Lanka, where as few as a quarter of dads played a similar role. Related research on households in Vietnam, Indonesia, Thailand and the Philippines found that Vietnam was the only country in which grandfathers — especially paternal ones — often played a key role in household decisions.

While there were some cases of adultery, divorce and drug abuse, the Vietnam survey results in particular appeared to challenge the notion that female labor migration leads to broken families, said Lan Anh Hoang, a lecturer in development studies at the University of Melbourne who conducted interviews in several Vietnamese villages for the survey. Vu Hoi and Vu Tien were part of the Vietnam sample, which covered the northern provinces of Thai Binh and Hai Duong.

Vietnamese men in rural areas “actually don’t mind doing household chores,” Hoang said. “They have always been involved in domestic work, so it’s not a big issue now that their wives are away.”

One possible explanation is that the country’s communist government has long promoted gender equality, she said.

“Of course there are positive and negative aspects of labor migration, but the media always focuses on the negative ones,” he said. “In Vietnam we pride ourselves on gender equality, and when women go abroad, most men are willing to pitch in around the house.” 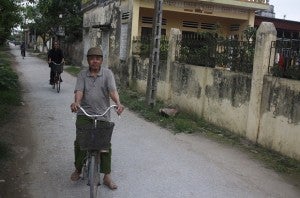 This photo taken April 17, 2014, shows men cycling through Vu Hoi, a village in northern Vietnam. According to the government, hundreds of men and women have left Vu Hoi over the last 15 years to work overseas. Indonesia, Sri Lanka and the Philippines already have high rates of female labor migration, but Vietnam and other countries are seeing upticks. AP

The total amount of remittances sent back from all Vietnamese workers overseas now exceeds $2 billion a year, said Nguyen Ngoc Quynh, director of overseas labor management at the labor ministry. Taiwan, Malaysia and South Korea are the top three destinations.

Tran Xuan Cuong, a farmer in a nearby village said some of the roughly 170 million dong ($8,000) his wife saved was used to build an addition on their home and to invest in raising pigs and brewing liquor.

He said some neighborhood men fell into alcoholism or even heroin abuse, but he wasn’t tempted.

“It was hard to be both a father and a mother, but it’s something we do because it’s our obligation,” Cuong said while sitting in his living room.

Women, too, have made many sacrifices, giving up being with their children to earn money abroad.

“Everything is for the livelihood of our family,” said Cuong’s wife, Pham Thi Lien, who worked in Lebanon as a maid and later in a factory. “We both had to overcome difficulties.”

Viet, the farmer and carpenter, said his wife was planning to return home from Taiwan for good later this year.

“I don’t mind farm chores,” he said with a grin. “But once she comes home, I’ll be more than happy to hand back the other ones.”