Many new college graduates in US suffer from depression

• Parents warned to look for signs of depression 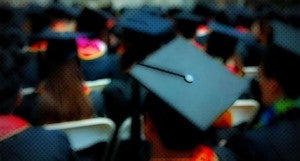 SAN FRANCISCO — For Dolaphine Kwok, the euphoria of graduating from college was quickly replaced by a growing unease about the road ahead.

“You just feel scared. Your academic bubble is popped, you feel unsure of yourself,” says the 22-year-old California native who graduated earlier this year from the University of Arizona with a degree in Optical Engineering.

The uncertainty eventually led to doubts about her choice of career path. “You feel trapped by your degree, and you wonder if you are really doing the right thing for yourself.”

Her experience is not unique. Many young people experience post-college depression.  For most, the period marks the first time outside of a school setting, causing an identity crisis of sorts. No longer students, work becomes the next foundation upon which to build a life.

But with youth unemployment persistently high across the country, a number of new graduates are struggling to make the transition from student to professional life. Many are returning home instead, with one-in-five Americans under 30 now living with their parents. That’s up from one-in-10 a generation ago.

And while overall unemployment numbers have dipped recently, for 18-29 year olds it continues to hover around 16 percent. For Hispanics and African Americans in the same age bracket the figures are even higher, at just under 16 and 24 percent, respectively.

The consequences for the economy are dire: apart from the billions in lost taxes, studies show billions more in lost earnings and lost years of potential experience for young people who remain unemployed for extended periods.

“I graduated a quarter early to hopefully get a head start on finding a job,” says Bowen Tan, 22. With a degree from UC Santa Cruz in Business Management, Tan says the job search has taken longer than anticipated. In the meantime, he’s returned to his parent’s home in the Bay Area. “It was pretty stressful, but after I moved back home, the anxiety hit hard, it felt like the stress doubled.”

Moving back with parents

Like Kwok, Tan says coming home after four years in college has led him to question the value of his time in school. “You lived here before you went you college, and now, you’re living here after college. It almost feels like my four years at college were a waste.”

UCLA psychology graduate TK Truong spent two years on the Student Advisory Council for the school’s mental health organization Active Minds. She says a lot of students don’t talk about depression, whether during school or after graduation.

“Depression is many times pushed to the side [because of the] negative stigma around it,” she says. “At a lot of big schools, mental health is also combined with general health services” and so gets less attention.

As for graduation, she says it’s a time when “everyone is taking pictures, asking about future plans … there is so much pressure.”

Glenn Matchett-Morris, associate director of Counseling and Psych Services at the University of Arizona, agrees. “Graduating is a major life transition,” he explains. “It actually is similar to college freshman moving away from home to go to school, but … scarier.”

As Matchett-Morris notes, returning home can be troubling for students who see no alternative. “You think going home is like it was before you went to college, but everything has changed. In your mind, it isn’t a safety net anymore. Suddenly, you think to yourself, ‘even home isn’t okay.’”

Matchett-Morris adds that if left unaddressed, these bouts of post-graduate depression can lead to more serious issues, including disruption of sleep patterns and withdrawal from daily social activities.

That’s what happened to Jeff Clear, who recently finished his degree in computer science. After returning to his parents’ home in Tucson, Clear, 22, took to video games and streaming movies on the Internet.

“I would kill a season in a few days, and would just keep watching,” he says. “When I finished, I would immediately try to find another show to watch.”

Enrique Morales works as an academic counselor at City College of San Francisco, where he says he sees an increasing number of these kinds of cases. He warns parents not to ignore signs of possible depression in their kids, including excessive gaming or sleep.

But he adds that not all new grads are taking things lying down. Many are returning to school to gain skills employers are looking for. “There’s been a ridiculous amount of college graduates not being able to find work,” he says, and so they come to places like CCSF, which offers skills-based courses that can lead directly to jobs.

At the height of the Great Recession community colleges across the country saw spikes in enrollment ranging anywhere from 5 to 10 percent. While those numbers have dipped, Morales says there remains a steady stream of college graduates aged 22 to 25 without work and in need of additional training.

Many, he notes, tell him they are “scared about their future.”

Raymond Fong is a recent graduate from the University of Arizona and will be pursuing his Master’s degree at Columbia University’s Teachers College in the fall.