MANILA, Philippines — Love scams are making a brisk business in the Internet and Filipino women in Malaysia have been victimized. 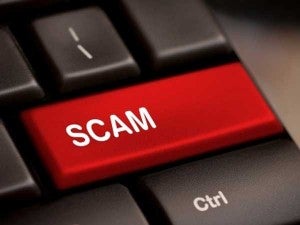 The Philippine embassy in Kuala Lumpur warned Filipinos against these “love scams” which it said mostly “involve asking for money on the pretext of love.

The embassy reported of three cases involving Filipinas who were duped by supposed lovers they met through chat rooms and Facebook. It has given these information to the Philippine National Police and the Royal Malaysia Police for their information and further action.

There was the case of a Filipina who said she became the fiancée of a Malaysia-based Briton two months after she met him on a social website.

“With their series of conversations on the internet and with promising words of this alleged Briton, the Filipina sent huge sums of money to him. The Briton was not heard from since,” the embassy said in a statement issued by the Department of Foreign Affairs.

Two other Filipinas were also duped by an alleged Malaysia-based Translink Express Courier, which had asked them to claim alleged parcels from their supposed lovers held up at the Customs office. But they were not able to get anything despite sending several amounts of money through Western Union.

These love scams though has also targeted a Malaysian who was victimized by a Filipina who go by the Facebook and Skype account names of Yukico Taro and Kico Taro.

“Accordingly, the woman, who is very attractive, constantly contacted the Malaysian national thru his Facebook account. As time went on, the two did intimate acts through webcam,” the embassy said.

It said the Malaysian was being asked by the Filipina to send her money or the video of “his indecent acts” which she had recorded without his knowledge would be uploaded on YouTube.

Saying that there may be many cases like these but were not reported, the Philippine embassy in Kuala Lumpur reminded “Filipino nationals and our Malaysian friends to exercise caution in dealing with people online, particularly those they have not met personally and who ask for money on the pretext of love.”