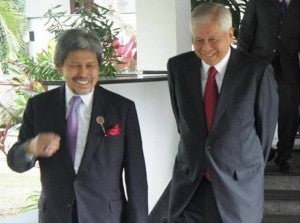 Foreign Secretary Albert del Rosario with Brunei Prince Mohamed Bolkiah in Brunei Darussalam on Thursday, July 10. The “rising tension” in the South China Sea was among the issues the Philippines and Brunei discussed during Del Rosario’s two-day visit on July 9-10. PHOTO FROM DFA.GOV.PH

Del Rosario’s two-day visit to Brunei was upon the invitation of Bolkiah, who is also the minister of foreign affairs and trade of Brunei.

“The two sides exchanged views on the rising tension in the South China Sea and affirmed their commitment to effectively manage the tensions and to seek a peaceful resolution of the disputes,” the Department of Foreign Affairs (DFA) said in a statement issued Thursday.

The DFA said Del Rosario and Bolkiah agreed on the “positive role” of the 10-member Association of Southeast Asian Nations (Asean) in promoting peace and stability in the region.

Both Manila and Brunei are members of Asean and are claiming some parts of the South China Sea as being part of their respective territorial claims.

DFA spokesman and Assistant Secretary Charles Jose said he did not think the two men discussed the new Chinese law set to take effect on Aug. 1 and will see China stepping up military security in its territorial waters.

The DFA is currently conducting a study on the implications of the new Chinese law to the Philippines’ sovereignty and claim to the West Philippine Sea.

In the statement, the DFA said the two foreign ministers discussed ways to promote cooperation in labor, health, information and communication technology and multimedia, defense and law enforcement and trade and investment.

They also agreed on the need to look into other areas where the two countries can cooperate to deepen and strengthen bilateral ties.

Del Rosario thanked Bolkiah for his country’s continued support in the peace process in Mindanao, particularly for its role in the International Monitoring Team in the Philippine-Moro Islamic Liberation Front ceasefire. He thanked Brunei for playing host to over 21,000 Filipinos.

Bolkiah, for his part, acknowledged the positive contributions of Filipinos in the development of his country.

Manila and Brunei will hold its third bilateral consultations next year in Manila.