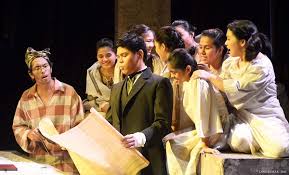 A scene from ‘Noli’ the opera. CONTRIBUTED PHOTO

WASHINGTON, DC – The opera based on Philippine national hero Dr. Jose Rizal’s novel, Noli Me Tangere, will be presented ” on August 8 and 9, at the Eisenhower Tower, John F. Kennedy Center here.

“Noli Me Tangere: The Opera,” the first Filipino opera, will be sung in Tagalog with English supertitles and full orchestration.

The opera is being produced the by Mid-Atlantic Foundation for Asian Artists, Inc. in cooperation with major sponsor the Migrant Heritage Commission.

The novel Noli Me Tangere, published in 1887, exposed the inequities of the Spanish friars and the colonial government, indirectly inspiring the Philippine Revolution.

It lampooned and caricatured various social ills during the colonial history of the Philippines. The work also paved the way for a national consciousness and identity and projected the personification of the ideal Filipina woman.

Noli Me Tangere in Latin, means “Touch Me Not” and refers to John 20:17 in the Bible as Mary Magdalene tried to touch the newly risen Jesus and he replied, “Touch me not, for I am not yet ascended to my Father. El Filibusterismo is its equally provocative sequel.

The novel has been translated into several languages adapted for theater, television and film throughout the last hundred years. The opera is set against the intriguing backdrop of 1890 Spanish colonial Philippines with period costumes and sets. It is being staged by more than 100 production cast and crew members mostly of Asian heritage.

The “Noli Me Tangere: The Opera” premiered in Chicago in 2012, through KGB Productions. It was then brought to New York by the Foundation for Filipino Artists, Inc. (FFAI) chaired by Loida Nicolas-Lewis, as part of the 25th anniversary celebration of Filipino-American History Month.

After the Washington, DC showing in August, the opera is slated for 21 shows from September 11 through 28, at the Resort World Manila, in the Philippines.

MAFFAA, a not-for-profit performing and visual arts organization based in Maryland promotes the rich and culturally diverse artistic works associated with the Philippines and Asia and addresses the underrepresentation of Asians in the arts. MAFFAA is a 501(c)3 tax exempt organization, founded by Dr. Ed and Lorna Imperial-Seidel.

The Migrant Heritage Commission is a Washington, DC-based non-profit that protects and promotes the cultural identity of Filipino immigrants in the US. It also addresses the growing concerns of migrant communities. The three MHC executive directors are Atty. Arnedo Valera, Grace Valera-Jaramillo and Jesse Gatchalian.

“Now is the time to show the world that we have world class musicians – that we are not simply good caregivers, babysitters, lawyers and accountants. I also knew that you, my friends just like me…love the Philippines and that you want to show the world that we are up there in culture and that the Noli Me Tangere The Opera is in the same vein as what they sing in the Metropolitan Opera in New York,” says Loida Nicolas-Lewis.

NY production of ‘Noli Me Tangere: The Opera’ comes to Manila

‘Noli Me Tangere: The Opera’ debuts in New York