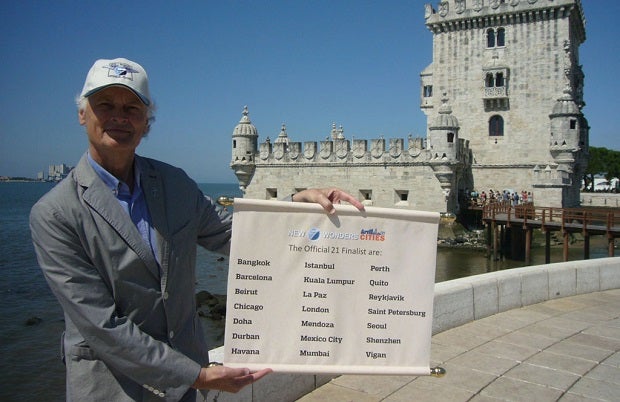 Bernard Weber, Founder-President of New7Wonders, bares the 21 qualifying cities for the New7Wonders Cities in Lisbon, Portugal on Tuesday. PHOTO FROM NEW7CITIES

MANILA, Philippines—The city of Vigan, capital of Ilocos Sur, has made it to the next round of the international search for New 7 Wonders- Cities of the World.

On Tuesday, July 8, the New7Wonders announced the 21 official finalists that will contend for the New 7 Wonder Cities. Bernard Weber, Founder-President of New7Wonders, made the announcement in Lisbon, capital of Portugal.

The other finalists are:

Voting continues until the contenders will be reduced to 14 on October 2. The top seven cities will be announced on December 7. The public may vote via new7wonders.com; international telephone voting lines; and national SMS.

Vigan, dubbed as the best-preserved example of a planned Spanish colonial town in Asia, was named a World Heritage Site by the United Nations Educational Scientific and Cultural Organization in 1999. It is one of the six Unesco World Heritage Sites in the Philippines.