“Due to the developments regarding the Ebola Virus outbreak in Western Africa, the DFA has raised crisis alert level 2 in Guinea, Liberia, and Sierra Leone,” DFA spokesman Charles Jose said in a press conference Wednesday.

“Under alert level 2 or restriction phase, Filipinos in these countries are instructed to restrict non-essential movements, avoid public places, and take extra precautions,” he said.

In Guinea there are 880 Filipinos, Sierra Leone (1,979 Filipinos), Liberia (632 Filipinos including 148 United Nations peace keepers), according to DFA records.

The World Health Organization (WHO) reported 759 confirmed cases of the virus including 467 deaths in its latest updated July 1, 2014.

The number of casualties is the highest ever recorded for the disease as humanitarian group Doctors Without Borders said that it was “overwhelmed” because of the out of control epidemic.

There is no known cure for Ebola Virus and scientists are still studying how it can be so deadly. 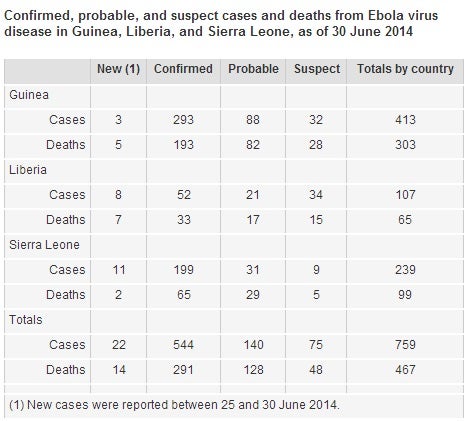 The WHO has so far recorded the highest number of deaths brought by the Ebola Virus Disease. SCREENGRAB from WHO website