Fil-Ams gush over ‘After the Storm’ benefit 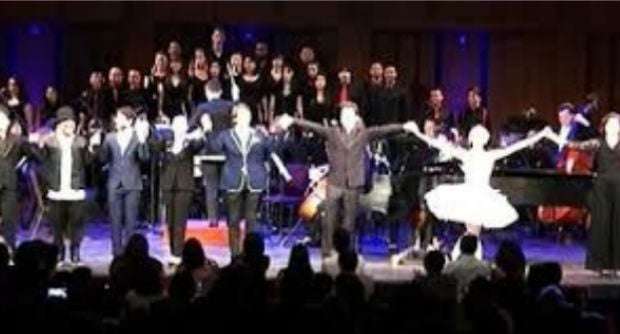 Performers led by actor Lou Diamond Philip take a bow at the end of ‘After the Storm’ benefit concert. CONTRIBUTED PHOTO

WASHINGTON, DC — Nothing but wide smiles were on the faces of concertgoers as they made their way out of the Kennedy Center following the successful “After the Storm” benefit performance last June 15.

People from all walks of life, both young and old, filled the 1,200-seat Concert Hall of the Kennedy Center for the Performing Arts. They were treated to a star-studded line up headed by Lea Salonga and Lou Diamond Philips.

The “After the Storm” concert was a benefit show for the survivors and victims of the biggest storm recorded in the history of the Philippines — typhoon Haiyan. Also seen enjoying the numerous Filipino world-class performances were members of the United States Congress, US government officials and diplomats.

Malou Araque, the programs and operations manager at US Philippine Society, said, “Unbelievable, it was moving and it was spectacular.”

Some members of the Filipino-American community who chose to spend part of their Father’s Day celebration attending the event had traveled far distances to show their support for a very worthy cause.

“It’s so fabulous, really fabulous. It’s well worth the money and the trip,” said Marilyn Donato, a registered dietitian from Roanoke, Virginia.

Tess Tuazon, regional chair for Philippine American Chamber Commerce based in Houston, said, “I am overwhelmed. This is a gorgeous event. It’s just an honor to be here to be around all these Filipinos.”

The concert, hosted by Philips, featured an eclectic musical repertoire, which included hip-hop, opera, ballet, Broadway tunes, contemporary and classical music by world-renowned artists from the Philippines and the United States.

Salonga, a Tony Award winner, belted out a medley of “I Dreamed a Dream” and “On My Own” from the musical “Les Miserables” and performed a duet of “A Whole New World” from Disney’s “Aladdin” with Filipino-American singer and songwriter Darren Criss, of “Glee.”

Marisa Corpuz of Mega World Corporation said, “We were excited about the concert and we looked forward to the show because these are big name performers and we were not disappointed.”

Rodel Rosel amazed the audience with his version of Puccini’s “Nessun Dorma,” an aria popularized by Luciano Pavarotti. Criss, for his part performed his own composition, “Not Alone.”

Amanda Torres, a recent high school graduate said, “This is great, my mom invited me to come and it’s like great.”

Although the event was clearly a hit, some people afterwards expressed unhappiness with the performance turned in by Charice Pempengco.

“It was awful,” Baltimore entrepreneur Charmaine Cruz said of the famous star’s contribution. “I did not even understand the song. For a place like Kennedy Center her performance was out of place.”

This was the first Filipino event in the Kennedy Center of this magnitude, and many considered the concert a moment of pride that showcased the bayanihan spirit.

Philippine Honorary Consul Ethel Mercado, of Dallas, Texas said that she expected a lot of donations to help the lives of those who suffered.

“Oh my goodness this is the best,” Mercado said.

For Gretchen Quipeles, a graduate of the University of Maryland-Baltimore County, it was something personal.   “It’s exciting to see the Filipino community come to together in that one room seeing a great act, raising money for typhoon Haiyan,” Quipeles said.

“It’s been a tough year but me and my friends from other universities have been trying hard to raise funds and knowing it’s coming together in the Washington metropolitan area it’s even great.”

Ambassador Jose Cuisa thanked the Filipino community in making the event a success.   “This is a very clear manifestation of the bayanihan spirit,” he said. “For the first time 33 organizations based in Washington, D.C. MD, VA worked together as one.”

In between the performances, visuals of the devastation from November 2013 and video messages from both US and Philippine government officials, and TV personalities like Gloria and Emilio Estefan, James Caan and Suze Orman popped up on screen.

In a video message United Nations Secretary General Ban Ki-moon said: “I visited the Philippines after the typhoon. But there was a little something that kept the people going.”

Vice President Biden’s second son, Hunter, a representative of the World Food Program, also went on stage to tell the audience how impressed he was with the resilience of the Filipino people. He said he was particularly amazed at seeing typhoon victims, among them children, welcome him with smiles along the roads of typhoon-devastated Tacloban.

Vice President Joseph Biden, in a message read for him by his daughter-in-law, Kathleen, reiterated the commitment made by President Obama when he visited the Philippines in April.

He said the US will continue to stand by the Philippines not only during troubled times, but also as the country gets back on its feet and rebuilds after Typhoon Haiyan.

Allan Pineda Lindo, better known as Apl.De.Ap of the Black Eyed Peas, got the audience dancing to the song “We Can Be Anything” as well as his rendition of “Where is the Love,” which he sang with Criss.

Cheryl Chua executive assistant to the general manager at Omni Shoreham Hotel in DC said, “It was so overwhelming, there’s so many Filipinos all in one room.”

Other artists who performed where violinist Philippe Quint, ballerina Christine Rocas and the Fairfax Symphony Orchestra. Filipina fashion designer Josie Natori was among the presenters.

“After the Storm: A Benefit Concert for the Philippines” was produced by Emmy Award nominee Robert Pullen and directed by Baayork Lee and musical director Luke Frazier.

For the finale, the performers gathered back on stage to sing the very fitting “Climb Every Mountain” from the “Sound of Music.”

Earlier in the evening an Independence Day and pre-concert reception for the community was held at the Roof Terrace Restaurant and Bar, also at the Kennedy Center.

Honored during the evening for their invaluable support towards recovery in typhoon-affected areas in the Philippines was the inspirational armless pilot Jessica Cox and performer Allan Pineda Lindo or apl.de.ap.

The Embassy of the Philippines presented Cox with a plaque of achievement for her excellence as a motivational speaker and advocate for the disabled. Cox’s family is from Guiuan where Typhoon Haiyan first made landfall. She has partnered with Handicap International to provide support for those who were disabled as a result of Typhoon Haiyan.

“I feel so humbled to receive it because I know the ones that needs the recognition are the victims and survivors of Haiyan and the many volunteers that have been there to help for months and months,” Cox told FilAm Star.

Apl.de.ap also received a plaque for his achievements and valuable service to the Philippines and the United States, and for making significant contributions in building the image of Filipinos and the Philippines in the US.

Apl.de.ap has done philanthropic work in the Eastern Visayas after Typhoon Haiyan and is set to conduct a music and arts camp for children affected by the typhoon in the near future.

Among the dignitaries who attended the reception were US Assistant Secretary of State for East Asian and Pacific Affairs Daniel R. Russel, Virginia Rep. Bobby Scott, Co-Chair of the US-Philippines Friendship Caucus at the House of Representatives; and Ambassador John Negroponte, Co-Chairman of the US-Philippine Society.

Also present were members of the diplomatic corps, US officials, businessmen, and the Filipino Community. During the reception guests feasted on some Filipino comfort foods like bringe, fresh lumpia, shanghai and adobo.

The multi-awarded UST Singers as well as tenor Rodel Rosel who sang “The Star Spangled Banner” and the Broadway Barkada who sang “Lupang Hinirang” also serenaded them.

TAGS: After the Storm: A Benefit Concert for the Philippines, Apl.de.Ap, benefit for victims of Haiyan/Yolanda, Darren Criss, Kennedy Center for the Performing Arts, Leah Salonga, Lou Diamond Philips