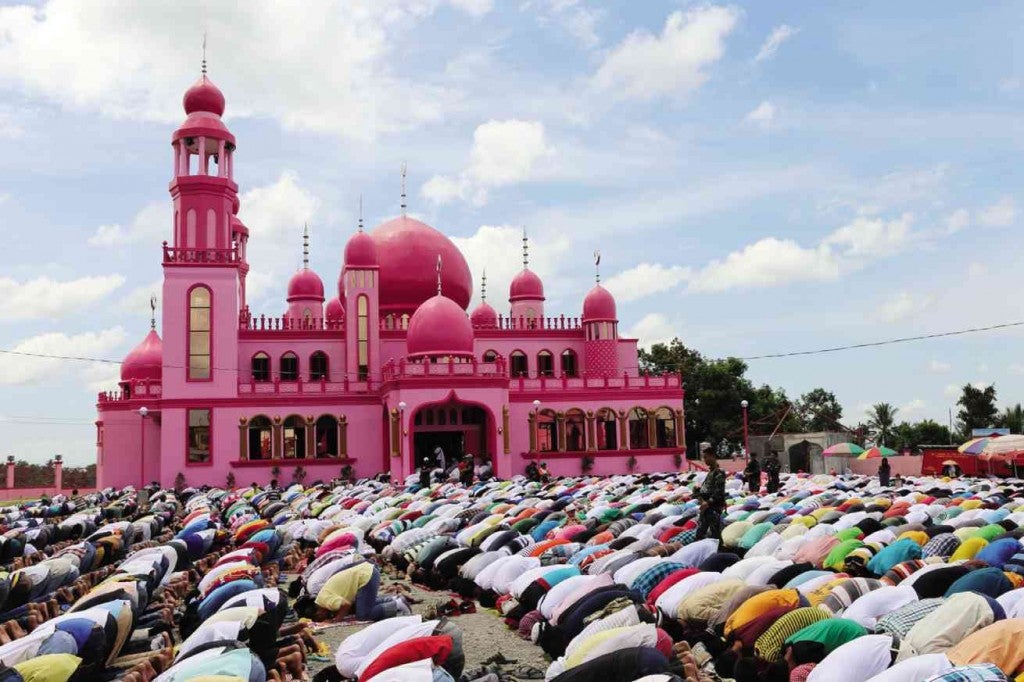 PRAYER FOR PEACE Filipino Muslims bow down to Allah outside Mindanao’s first ever pink mosque at Datu Saudi Ampatuan town, Maguindanao province, as they observe the start of Ramadan, the Islamic month of fasting. Devotees of Islam are expected to abstain from food, drinks and other physical needs during daylight hours. The fast is one of the five pillars of Islam, which also include the annual pilgrimage to Mecca. JEOFFREY MAITEM/INQUIRER MINDANAO

LONDON—Before the fast, let there be a shopping feast.

From Harrods in Knightsbridge to the glittering diamond stores in Mayfair, London has long attracted big spenders. But every year around the holy month of Ramadan, which starts this weekend, a wave of spectacularly rich Middle Eastern shoppers arrives and takes retail therapy to a whole new level—complete with an entourage of bodyguards, chauffeurs and Gulf-registered Rolls-Royces and Ferraris flown in just for the occasion.

Retailers call the boost in business the Ramadan Rush: A hugely lucrative and fast-growing market driven by wealthy Arabs who travel to Britain to escape the desert heat and indulge in buying luxury gifts before flying home for a month of fasting and increased religious observance. Another surge takes place during the Eid holiday, which marks the end of Ramadan.

The spike in shoppers during the summer months has been so regular and noticeable on London’s streets that some have jokingly dubbed the phenomenon the “Harrods Hajj,” after the traditional Islamic pilgrimage to the holy city of Mecca.

“London is the place in Europe where the Middle Eastern visitor shops the most. It is almost their second home,” said Gordon Clark, UK manager at Global Blue, the Switzerland-based retail research firm. The company estimates that pre-Ramadan sales last July jumped 60 percent compared with the previous year.

Although tourists from the oil-rich United Arab Emirates, Kuwait, Saudi Arabia and Qatar make up only a small percentage of total visits to Britain compared with those from the United States and Europe, they tend to be much more lavish spenders on average. Official figures show that Middle Eastern tourists ranked just 19th in terms of numbers of people last year, but came second in total spend—888 million pounds ($1.5 billion).

The Kuwaitis are the biggest spenders, shelling out some 1,340 pounds ($2,275) per transaction last July, Clark said.

That corresponds with data from the London Luxury Quarter, a group that represents some of the highest-end businesses in central London. It said the average spend from Middle Eastern shoppers last year came just behind the Chinese, its top customers.

Ramadan falls on the ninth month of the Islamic lunar calendar. Muslims around the world fast from dawn to sunset for a month, starting Saturday.

The weeks surrounding the month offer retailers an opportunity they can’t afford to miss, and many brands have responded to the trend by rolling out VIP services just for the period.

The Westfield mall—one of Europe’s largest—hopes to bring in record sales with the help of extra Arabic-speaking concierges and personal chauffeurs. For the really prolific shoppers, there is a “hands-free” service, which involves helpers who collect the shopping bags and help pack them in the car.

Other cosmopolitan cities, such as Paris or Dubai, also see their share of pre-Ramadan shopping. But analysts say London has become the favorite destination.

Language is one reason—most of the shoppers can speak English. But that’s just part of it.

“London has got the cultural aspects, the history, and it’s a wonderfully inclusive city to visit,” Ryan said. “The temperature’s comfortable. And because the Middle Eastern customer is so important, hotels and the tourism industry are also very adept at making them comfortable.”

All that may leave the average British or American shopper feeling a bit left out. But the Ramadan Rush does bring one direct benefit to the masses: Earlier sales. Many of Britain’s department stores and fashion brands have been adjusting their summer sales schedule to make sure the high rollers get to shop new stock when they arrive.

“They’re not interested in sales, because the stores are too busy,” Clark said. “It’s not a good shopping experience for them.”

More than 60 dead as Iraqis mark end to lethal Ramadan