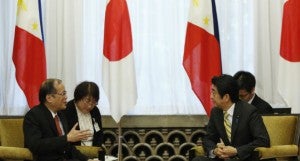 Lacierda divulged few details of the meeting, other than it was a 15-minute encounter and that they talked about the planned law that would create an autonomous Muslim region in the southern Philippines.

“It is safe to assume that the draft Bangsamoro Basic Law was discussed,” Lacierda said.

Muslim rebels have been battling for independence or autonomy in the southern islands of the mainly Catholic Philippines since the 1970s, with the conflict claiming tens of thousands of lives.

A commission composed of rebel and government nominees drafted a “basic law” for the autonomous region, and it was submitted to Aquino in April as part of a timeframe to have Congress pass it by June.

Aquino, however, is still reviewing the planned law. His aides have said this is because he wants to ensure it withstands scrutiny of the legislative body.

He said Aquino must marshall his allies in Congress to pass the law this year.

Aquino, in his Tuesday speech before meeting Murad, highlighted a similar encounter between the two in Japan in 2011 that built momentum in the peace process.

“Trust was established between brothers, and a genuine dialogue was possible,” Aquino said.

No details bared in Aquino-Murad meet