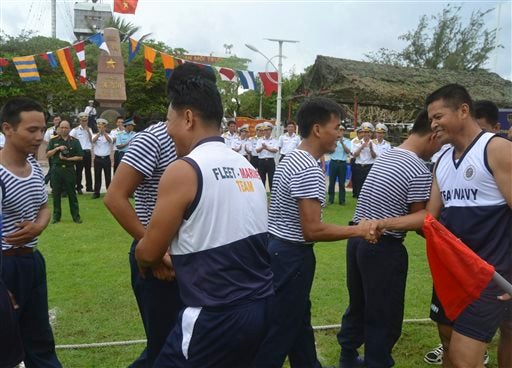 In this photo taken Sunday, June 8, 2014, and released on Wednesday, June 11, 2014, by the Philippine Navy Public Affairs Office in Manila, Philippines, naval personnel from Vietnam, in striped shirts, and the Philippines, shake hands following a tug of war game at the Vietnamese-occupied Southwest Cay Island in a rare display of camaraderie in the South China Sea, where their territorial rifts with China have flared alarmingly. AP FILE PHOTO

Top diplomat for East Asia, Daniel Russel, was speaking at a congressional hearing Wednesday, two weeks ahead of high-level talks between the two global powers in Beijing.

Russel said Washington wanted to build “strategic trust” with Beijing and economic cooperation, but would also push for the release of political prisoners.

Russel criticized China’s recent actions in the East and South China Seas which he said had left its neighbors “understandably alarmed.”

China is locked in a standoff with Vietnam after deploying oil rigs in waters claimed by nations, and has running territorial disputes with U.S. treaty allies, Japan and the Philippines.