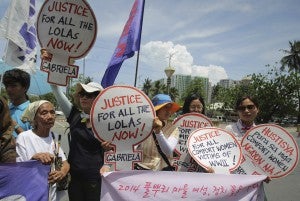 Korean women activists join a rally in front of the Japanese Embassy in Manila, Philippines on Wednesday June 25, 2014. A group of alleged Filipino “comfort women” demanded recognition following the announcement of the affirmation of the Kono statement as a result of the Japanese government investigation on the alleged World War II sexual slavery in Korea. AP

MANILA, Philippines — Filipino women forced into prostitution by the Japanese military during World War II have marched to the Japanese Embassy to demand justice and to criticize President Benigno Aquino III’s silence on the issue during his recent visit to Japan.

Six women in their 80s and some two dozen supporters and activists picketed the embassy Wednesday to call on Prime Minister Shinzo Abe to apologize and compensate them for their ordeal.

They say Japan must go beyond statements and resolve the issue following its landmark 1993 apology for forcing Asian women into wartime prostitution.

A Japanese panel last week confirmed the validity of a study that led to Japan’s 1993 apology. Abe has been criticized for backpedaling from past Japanese acknowledgements of wartime atrocities.