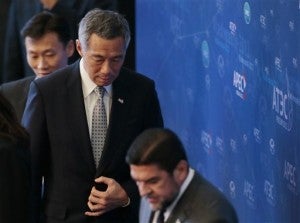 WASHINGTON—Singapore’s prime minister said Tuesday international law should determine how territorial disputes in the South China Sea are resolved, rather than the notion that “might is right.”

Prime Minister Lee Hsien Loong was responding to a question about China’s expansive territorial claims in resource-rich oceans that have spooked some of its Southeast Asian neighbors.

Singapore is not a claimant state in the South China Sea, but is supportive of efforts by Southeast Asia’s regional bloc to negotiate with China a code of conduct to manage and resolve the territorial disputes, that have increased regional tension. The city state also balances its strong ties with Washington with cordial relations with Beijing.

Lee noted that China says its claims have a historical basis that predates international law.

“I’m not a lawyer so I presume there’s some plausibility in that argument,” Lee told the Council on Foreign Relations during a visit to Washington, “but from the point of view of a country which must survive in the international system where there are big countries and small, outcomes cannot be determined just by might is right.

“I think international law must have a big weight in how disputes are resolved,” Lee said, also praising for the US generally following such principles.

Lee added that the Chinese have seen other great powers during history that have tried to rise by “might” only to rise and then fall. He said the Chinese “are trying not to make the same mistake.”

The United States has been critical of what it considers provocative Chinese actions to assert its territorial claims, most recently by positioning oil rig in waters also claimed by Vietnam. China has also had standoffs at sea with US ally the Philippines.

China hits back at US, Japan for ‘provocative’ remarks