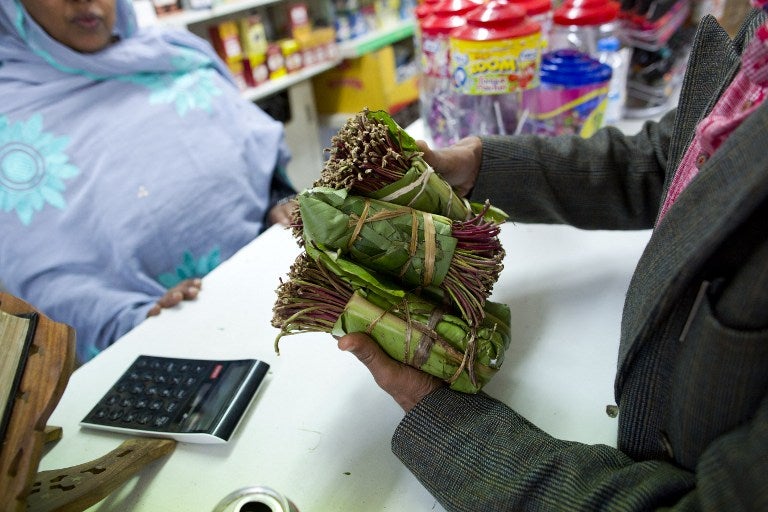 In this file picture taken on June 20, 2014, a man holds bundled of the stimulant plant khat (qat), in Harlesden, north west London. Britain on June 24, 2014 became the latest nation to formally outlaw the herbal stimulant khat, the bushy leaf chewed by many Somalis, Yemenis, Kenyans and Ethiopians. Under a new law, khat is now a “class C drug”, making possession punishable by up to two years in jail and supply and production punishable by up to 14 years. AFP

The British Embassy in Manila, in a letter by second secretary Colin Glen to the Manila International Airport Authority, said London’s classification of the khat plant as an illegal substance and the ban on its production, possession, supply, importation or exportation took effect 7:01 a.m. on Tuesday (12:01 a.m. in London).

Guerzon said UK law enforcers have been empowered to seize and destroy all forms of khat — fresh, dried, frozen or processed — and products containing khat, as well as prosecute individuals and businesses violating the ban.

Penalties of up to 14 years imprisonment and fines would be meted on the violators, he added.

According to the British Embassy, khat (scientific name: Catha edulis) contains the naturally occurring compounds cathinone and cathine, which have stimulant properties and are drugs subject to international control. The plant, which is native to the Arabian Peninsula and the Horn of Africa, is already illegal in the United States, Canada, most of Europe, India, Saudi Arabia and several African countries.

The embassy said the decision to ban khat was approved by the UK parliament and was taken for a number of reasons including public concerns on the health and social harms associated with khat use in UK communities.

British authorities are also worried about the risk of the UK becoming a single regional hub in the European Union for the onward smuggling of khat from Africa to other countries where the drug has already been banned.

The consumption of khat is legal in Yemen, Ethiopia, Somalia and Djibouti, where the chewing of the plants’ leaves is an ancient social custom.