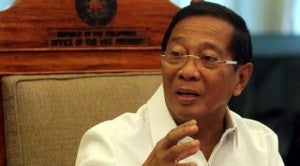 “I thank Google for not allowing itself to be a platform for prejudice and ethnic discrimination, and I laud everyone from Google for leading the drive in keeping the world wide web free from bigotry and intolerance,” the Vice President said in a statement.

Binay, who is also the Presidential Adviser on overseas Filipino workers, said Filipinos should “hold their heads high.”

“As Carlos P. Romulo once wrote, in our blood runs the immortal seed of heroes – seed that flowered down the centuries in deeds of courage. Let us be proud of our culture and heritage, but at the same time, let us also be examples of tolerance, respect, and acceptance,” he added.

Binay also defended Singaporean citizens whom he called “good friends and partners,” saying that the blogger chose to remain anonymous because he will be held liable under Singaporean law for hate speech.

The article said a Google spokesperson refused to confirm the news but said that they do remove material from Blogger, where the site was hosted, that violates its policy on hate speech.

Google takes down guide on how to harass Filipinos in Singapore