Palawan dance world premiere in the works in San Francisco 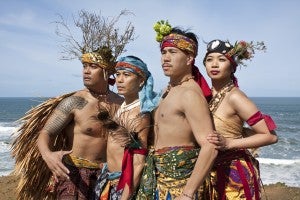 As Loyola described the inception of the current project, “We’ve been cooking this idea for about two years. I would go to Alleluia’s place to have dinner and brainstorm about possible projects. We’d randomly come up with something and we’d figure out whether the concept is something that a funder would support for grants.”

The production includes guitar artist Florante Aguilar in the planning. “We decided that he’s be the best person to work on the musical piece of the production. He came up with several ideas and now we are holding two workshops with the intention of picking the right cast for the show,” Loyola added.

Starting in May this year, Loyola conducted the first round of workshops for the show where intermediate and advance dancers were encouraged to join. The workshops are held in Alonzo King Lines Ballet studios in San Francisco. The sessions are intended to give dancers the chance to learn basic traditional Palawan movements and work with them in infusing their own skill set into the production.

The theme of the production recreates an island in the Philippines by capitalizing on traditional movements and incorporating western style of dances. These dances are translated into a story inspired by conceptualizing a new tribe called “Maseg.”

“Maseg is a concept from an imagery of a new tribe of Filipinos in the states. It’s birthing a new set of people doing contemporary movements where traditional Philippine style is more elaborate and amplified,” Loyola explained.

The second round of workshop started on June 11. A crowd-funding event is set to support the project on July 1 this year.

In the past two decades, Jay Loyola has created over 40 Filipino folk dance works and performed in Asia, Europe and the US. He has significantly contributed to the Bay Area’s multicultural landscape, creating performances at venues such as the Palace of Fine Arts, Cowell Theater, the San Francisco Ethnic Dance Festival, Pistahan and the Filipino-American Arts Exposition.

Loyola spent his youth exploring the world of dance through a series of immersions to tribal communities, dance competitions and international dance festivals. He has extensively researched the rituals and traditions of the tribal people of Palawan and has become an adopted Tagbanua in the highlands of Palawan in the Philippines.

Loyola is the Founder Emeritus of Palawan Dance Theater, now the premier dance company of the region. He moved to the US in 2006 and served as Dance Director of LIKHA Philippine Folk Ensemble ’07-08. He is now the Artistic Director of the American Center of Philippine Arts.