‘It is getting worse’: 12 Chinese ships monitored inside PH’s EEZ 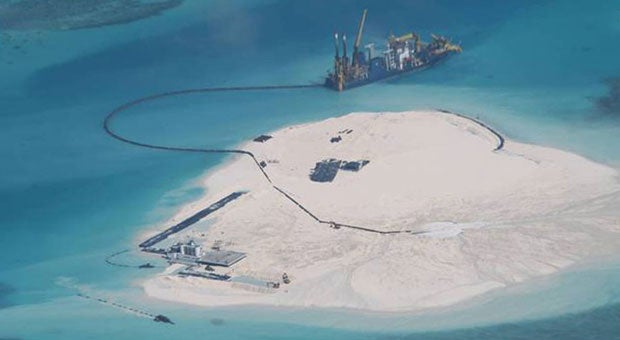 In this Feb. 25, 2014, file photo taken by surveillance planes and released May 15 by the Philippine Department of Foreign Affairs, a Chinese vessel, top center, is used to expand structures and land on the Johnson Reef, called Mabini by the Philippines and Chigua by China, at the Spratly Islands in the West Philippine Sea. The Philippine Air Force monitors 10 to 12 Chinese Coast Guard vessels in the West Philippine Sea on maritime patrol missions, prompting Manila to seek an expeditious ruling by a United Nations tribunal on its challenge to Beijing’s expansive claim over the South China Sea. AP PHOTO/PHILIPPINE DEPARTMENT OF FOREIGN AFFAIRS

MANILA, Philippines–The Philippine Air Force monitored 10 to 12 Chinese Coast Guard vessels in the West Philippine Sea on maritime patrol missions, sensing haste in Chinese activity in disputed waters. This has prompted Manila to seek an expeditious ruling by a United Nations tribunal on its challenge to Beijing’s expansive claim over the South China Sea.

Late on Tuesday, Foreign Secretary Albert del Rosario said China’s increased activities in disputed waters were escalating tensions in the region so that Manila was looking to seek a quick ruling from the UN arbitral tribunal.

“What we want to do is, because China is not participating, and because the situation is getting worse every day in the South China Sea, I’m asking our [lawyers] in the US if we can present a request to the tribunal if they can hasten the process,” Del Rosario told reporters.

The West Philippine Sea is part of the South China Sea within the Philippines’ 370-kilometer exclusive economic zone (EEZ), but China, insisting that it is part of its territory, is reclaiming land on various reefs in those waters that may be used to build offshore military outposts.

China’s dredging vessels are escorted by Coast Guard ships to keep vessels from other claimant states away.

“We intensify the number of flights in the area so that we can detect the presence of ships and the developments on the islets … We can’t count the number of ships on a particular day because these are moving vessels on patrol. Their presence can’t be fixed in one place,” Air Force spokesperson Lt. Col. Enrico Canaya said.

Col. Florente Falsis, deputy Air Force chief for intelligence, said there were times when the Chinese Coast Guard vessels numbered from 10 to 12, or just three or four.

Canaya said the maritime patrols had also observed dredging on islets, confirming reports of “development” on islets and reefs in the media.

“Every time there is an air patrol, we observe their presence,” Canaya said.

China’s haste to stake its claim to 90 percent of the 3.5-million-square-kilometer South China Sea is seen as an effort to beat the conclusion of a code of conduct in disputed waters with its Southeast Asian neighbors and a ruling by the United Nations International Tribunal for the Law of the Sea on the challenge to that massive territorial claim brought by the Philippines in January last year.

China has refused to take part in the proceedings, but the tribunal has ordered it to respond to the Philippine case by Dec. 15.

Beijing has become increasingly aggressive in asserting its claim since the Philippine case went up and US President Barack Obama visited Asia in late April, assuring US allies Japan and the Philippines that the United States would defend them if attacked over territorial disputes.

The Philippines has asked the tribunal to nullify China’s claim to almost the entire South China Sea, which Manila says encroaches on its exclusive economic zone and those of Brunei, Malaysia, Vietnam and Taiwan, all of which also have claims in the strategic and resource-rich waterway.

Manila also wants to clarify maritime entitlements in the South China Sea and halt China’s incursions into the Philippines’ economic exclusion zone, which have become frequent in recent months.

Government officials have said it may take three to four years for the UN tribunal to issue a decision.

“[We hope], since China is not participating, perhaps we can get a quicker resolution from the tribunal,” Del Rosario said.

“I’m hoping that we will get something by next year, but we really don’t know,” he added.

Del Rosario described the case as the “goal line” for the Philippines, which is also pressing for a freeze on activities that raise tensions, a nonaggression pact to prevent the rival claims from erupting into conflict, and legal action for resolving the conflicting claims.

“The only mechanism [for dispute resolution] that’s out there right now—the Philippines is the one that advanced it—is arbitration. So we hope to be able to get the arbitration in place, that will be the goal line for all of us,” Del Rosario said.

“It’s not only for the Philippines, it’s for the international community,” he continued. “With that, we can make sure that maritime entitlements are clarified … and, having done that, we will be able to say that there’s no more danger to freedom of navigation and freedom of overflight.”

Del Rosario said he was encouraging Indonesian Foreign Minister Marty Natalegawa to pursue his proposal for a meeting among the claimant states for discussion of the increasingly tense situation in the South China Sea.

He said he hoped the meeting could be held before the Association of Southeast Asian Nations (Asean) Regional Forum in Burma (Myanmar) in August and that he would be “honored to host” the claimants’ meeting.

Del Rosario said the meeting would be an appropriate place to raise his proposed moratorium on “provocative activities” in the South China Sea, an echo of a suggestion from Daniel Russel, the top US diplomat in Asia, who had been speaking about a freeze on activities that stirred up tensions pending the conclusion of a binding code of conduct among the claimants.

China has refused early talks for a code of conduct, insisting on bilaterial negotiations with individual claimants and proceeding to develop territory in the sea where islands, islets, atolls and reefs are believed to be sitting on vast oil and gas reserves.

On May 1, China moved a deepwater oil drilling rig near the Paracel Islands in the East Sea, waters within Vietnam’s exclusive economic zone in the South China Sea, sparking a standoff between dozens of Chinese and Vietnamese ships in the area.

The result has been rammings, the sinking of a Vietnamese fishing boat, and deadly anti-China riots in Vietnam.

Aerial surveillance photographs released recently by the military showed a Chinese dredging vessel anchored on Mabini Reef and what appeared to be reclaimed land that it was feared could be used to build an airstrip within Philippine territory.

The Philippines has protested China’s moves in the West Philippine Sea but Beijing has rejected the protests, insisting it has “undisputed sovereignty” over the South China Sea.–With a report from AP