Philippines still mulling over recognition of new gov’t in Libya 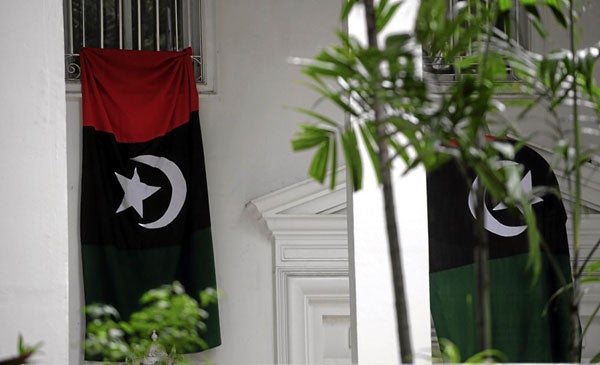 The pre-1969 Libyan flag is hoisted at the embassy of Libya in Manila as Libyan diplomats declared that they are withdrawing support to strongman Moammar Gadhafi in Manila on Wednesday. AFP

MANILA, Philippines—Days after issuing a statement expressing support for a peaceful transition in Libya, Malacañang has yet to officially recognize any new government in that war ravged country.

Edwin Lacierda, President Benigno Aquino’s spokesman, said the Department of Foreign Affairs has asked for more time before issuing a statement on the matter as its foreign officers were continuing to monitor the situation in Libya.

“I asked them, ‘Have we recognized Libya?’. They said we still have to wait because they’re still evaluating and monitoring the situation in Libya for now,” Lacierda said in an interview on the state-run radio station dzRB.

“So, I told them, ‘We will defer to your monitoring and evaluation and you let us know.’ As of now, it has yet to reach that point (of recognizing the rebel side),” he added.

Lacierda said the safety of the country’s migrant workers in Libya remained the utmost concern of the government.

“What’s important for us here in the Philippines… is the protection of our OFW’s (overseas Filipino workers). We continue to monitor their safety, we continue to monitor where they are at least and to monitor if they’re willing to be repatriated. That is so far our primary consideration,” Lacierda said.

The decision on recognizing the new government will have to wait “because we still have many nationals in Libya,” Lacierda said.

Malacañang last week released a statement expressing support for the “transition” in Libya as rebel forces wrested control of most of the Middle Eastern country from longtime strongman Moammar Gadhafi.

“The Philippines welcomes the imminent resolution of the conflict in Libya,” Lacierda said in a statement Wednesday.

Lacierda’s statement came in the wake of an assurance from Libyan rebels to the Philippine embassy in Tripoli that fleeing Filipino migrants would be given safe passage out of the country.

On Wednesday, the Libyan Embassy in the Philippines defected to the rebels’ side, raising the red, black and green flag of the anti-Gadhafi forces.

Around 1,600 Filipinos are still believed to be in Libya, many of them nurses treating casualties of the months-long uprising against Moammar Gadhafi. With Agence France-Presse