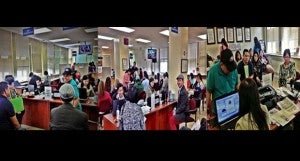 Registrants await their turn at the Philippine Consulate in San Francisco to submit filled forms and be assisted by consular staff in processing their biometrics (fingerprint, pictures) at the Overseas voting registration area.

MANILA, Philippines–Philippine foreign outposts are reaching out to Filipinos overseas to make sure they have their say on election day.

The Department of Foreign Affairs (DFA) posted a record number of new Overseas Absentee Voting (OAV) registrants in the first month of registration in May, with a total 18,631 Filipinos signing up to vote abroad during the monthlong overseas voting period for the 2016 presidential elections.

“The record number of overseas voter registration is due, in large part, to the intensified and innovative efforts of our foreign service posts to educate Filipino communities overseas on the importance and processes of overseas voting as well as to make registration of overseas voters more convenient and accessible,” Assistant Secretary Charles Jose, DFA spokesperson, told the Inquirer.

He said the DFA’s 84 foreign outposts—embassies, consulates and missions—were working to ensure “that equal opportunity is given to all qualified Filipino citizens abroad in the exercise of the fundamental right of suffrage.”–Tarra Quismundo