A US-based revival of ‘Baybayin’

A campaign to revive Baybayin or the alibata script, the writing system of pre-Hispanic Philippines that includes surat Mangyan, has been launched in the United States by cultural activist Norman de los Santos.

The 42-year-old immigrant from Oriental Mindoro also wants  to promote the different indigenous cultures of the Philippines and show the world its diverse and rich cultural heritage.

De los Santos arrived in the United States when he was 18, bringing with him memories of his cultural heritage. Now he wants to promote it among new generations of Filipinos and non-Filipinos by using  social media and computer programs.

The computer technology graduate of the Desert College Itt Technology in Palm Desert California, who is an entrepreneur and a consultant of BHM Publishing House, hopes to revive and promote Baybayin through technology.

In the early 2000s, as he developed video games, he started incorporating indigenous writing systems and imagery in his work. 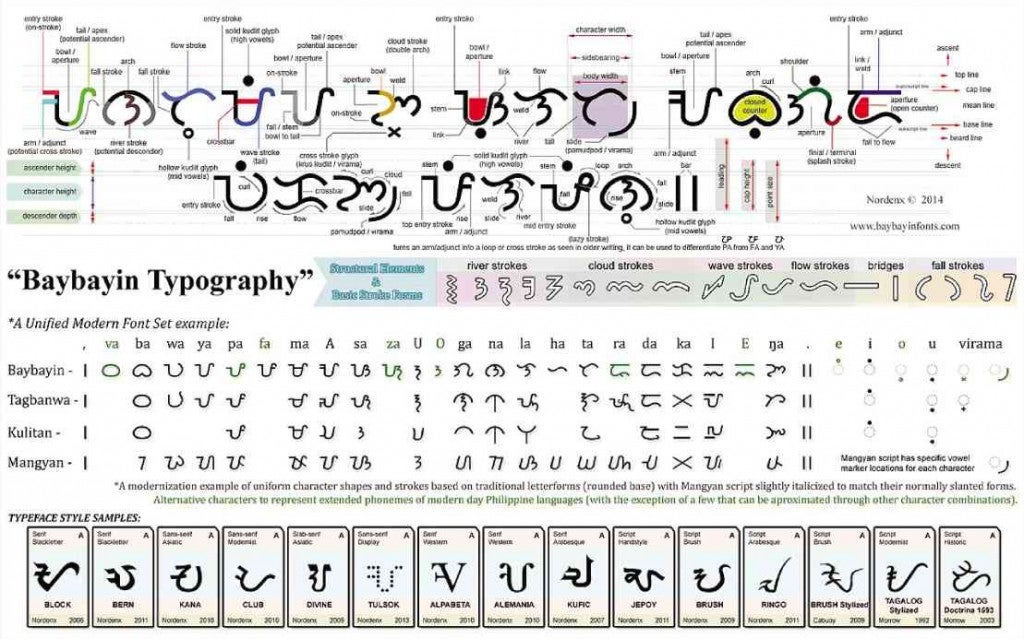 DE LOS SANTOS developed the fonts for the modern Baybayin that can be viewed on his web page. The Filipino is on a mission to promote the Philippines’ different indigenous cultures and introduce people to the country’s rich and diverse cultural heritage.

De los Santos was exposed to the Mangyan culture and began to understand the importance of a person’s heritage when he was growing up in Mindoro.

All his life he nurtured his interest in Filipino culture, specifically the culture of  the Mangyan in his home province, their traditional crafts, language, arts and writing systems.

“When I was in Mindoro, I volunteered at the Mangyan Heritage Center. An aunt on my mother’s side married a Mangyan, so I have cousins who are half-Mangyans,” he says.

“I am part of a vanishing culture (and) an emerging future. To save my heritage, I secure my legacy. I create things for perpetuity. Whether it’s tangible or not, I give what I can and share what I have. So that, in the future, our descendants can say, ‘look, this is who we are,’” he says.

De los Santos says children of Filipino immigrants usually grow up without a cultural identity. Only a few are lucky enough to have parents who can find time to explain to them their roots.

The youth adopt the various cultures around them. But they do not really fit in, De los Santos says.

He says knowing one’s cultural heritage and identity gives a person confidence and self-awareness. The youth acquire a foundation on which they can build true pride and recognize limitations that they need to overcome.

Knowing one’s identity, he says, also makes young people more socially aware, active in the community and sensitive to the plight of the world’s indigenous peoples. It helps them rise above discrimination and builds stronger character so they can become better citizens of the world. 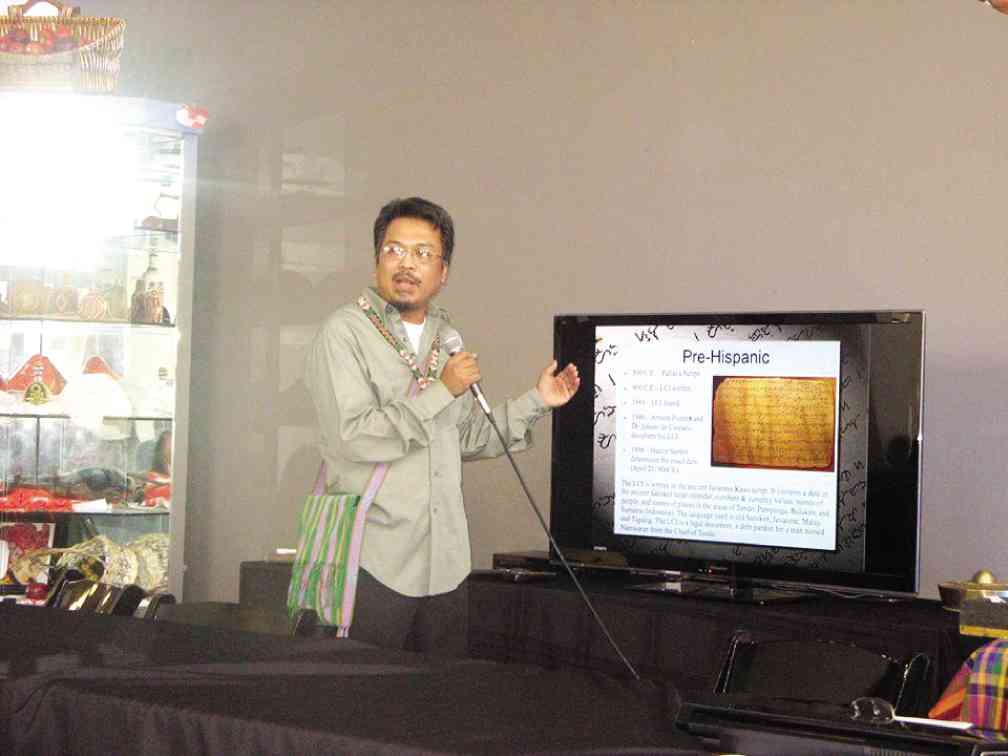 DE LOS SANTOS shows the pre-Hispanic Baybayin script in one of his lectures.

“I work with various individuals and groups that have a similar goal. We spread awareness through mentorship, partnerships, collaborations, community event participation, commercial ventures, online sites and social media, networking and other means possible and/or necessary to get out there and share,” he says.

He presented Baybayin at the International Workshop on Endangered Scripts of Island Southeast Asia in February in Tokyo, Japan hosted by the Linguistic Dynamics Science Project of the Research Institute for Languages and Cultures of Asia and Africa (ILCAA).

Aside from lecturing, De los Santos was involved in Tuklas-Discover the Indigenous Cultures of the Philippines, which was part of the Philippine Expressions Bookshop 30th anniversary celebration and the Asian Pacific American Heritage Month in May.

The event was highlighted by the presentation of kulintang; Filipino martial arts, textiles and clothing, and Baybayin writing systems among other things. The event  was hosted by the Croatian Cultural Center of Greater Los Angeles.

De los Santos also published the graphic novel series “Anak Bathala.” He is working on a new book, “Modern Baybayin.” He maintains a blog, nordenx.blogspot.com, that offers free tutorial on Microsoft application of the Baybayin.

De los Santos collaborates with indigenous peoples from other countries by having dialogues and regular correspondence and holding workshops and conferences so they can learn from each other.

He is collaborating with the Native Americans and Canadians, Hawaiians and recently, Indonesians, Australians and Japanese. He is also working with other Filipinos who are scholars and advocates of endangered scripts.