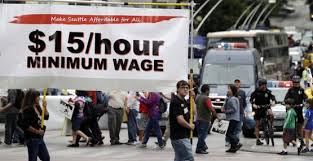 SAN FRANCISCO, California — Mayor Edwin M. Lee and 10 members of the Board of Supervisors June 10 introduced a proposed consensus measure for the November 2014 ballot that will raise San Francisco’s minimum wage to $15 per hour, by July 1, 2018.

The Mayor was joined by the Coalition for a Fair Economy, the San Francisco Chamber of Commerce and many organized labor groups to announce the consensus measure.

“San Francisco is the most progressive city in America when it comes to addressing income inequality, and we are national leaders in our support of working families and low wage earners,” said Lee.

He thanked all collaborators of the measure for a “thoughtful analysis and evaluation of how to increase the rate responsibly that will raise the minimum wage in a way that supports our businesses, protects our economic recovery, and boosts wages for working people.”

When the San Francisco minimum wage of $8.50 per hour rolled out in 2004, the City had the highest minimum wage rate in the country.

Because the legislation called for increases along with CPI, San Francisco still has the nation’s highest minimum wage at $10.74 per hour.

Despite CPI adjustments, the minimum wage has not kept pace with the true cost of living in San Francisco. (Lee also supports President Obama’s effort to raise the Federal minimum wage to $10.10 an hour.)

Despite the successful minimum wage increase in 2003, San Francisco wages have not kept pace with the skyrocketing cost of living, Kim explained.  “We have struggled with an ever-widening income gap that has made it difficult for employees to live where they work and support their families.”

Shaw San Liu, lead organizer for the Coalition for a Fair Economy and the Chinese Progressive Association said, “The Campaign for a Fair Economy, a coalition of community and labor organizations, has worked hard to ensure that low-wage workers have a fighting chance to survive in San Francisco.” said.

“This $15 minimum wage measure will put millions of dollars into workers’ wages. It is an important part of a larger agenda to close the income gap and ensure that working families can continue to live and thrive in our diverse city,” Liu added.

Wade Rose, co-chair of the Public Policy Committee of San Francisco Chamber of Commerce also praised the proposal: ”We applaud Mayor Lee for considering the impact to businesses – large and small – as he led this effort to bring people together to send one strong measure to the voters this November.”

Last December and again in his State of the City Address in January 2014, Lee committed to putting forward a ballot initiative to significantly raise the minimum wage in San Francisco.

Based on existing law, the minimum wage in San Francisco will rise to approximately $11.00 per hour, effective January 1, 2015.

Employers must pay San Francisco’s higher minimum wage for all covered work performed within the City. However, the measure provides different rates for youth trainees and senior subsidized employment, which will be capped at a rate of $12.25 plus an annual Consumer Price Index (CPI) adjustment.