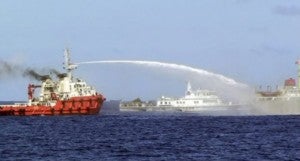 In this file photo released by Vietnam Coast Guard, a Chinese ship, left, shoots water cannon at a Vietnamese vessel, right, while a Chinese Coast Guard ship, center, sails alongside in the South China Sea, off Vietnam’s coast, on May 7. AP 

BEIJING—China has accused Vietnam of damaging peace and stability, state media said Tuesday, as it sought to drum up support at the United Nations in an ongoing territorial row.

Hanoi and Beijing have been embroiled in a bitter war of words as the two sides have traded accusations concerning maritime confrontations near an oil rig that China moved into contested waters near the Paracel Islands.

Last week, Vietnam released dramatic footage showing a large Chinese ship chasing and ramming one of its fishing boats, which then sank near the rig.

“Such actions also undermined the freedom and safety of navigation in these waters, and damaged peace and stability in the region,” Wang said, according to the report.

Wang also asked Ban to circulate the position paper, which includes an article from the Chinese Foreign Ministry detailing its allegations, among all UN member states, the report said.

Foreign Ministry spokeswoman Hua Chunying on Tuesday vented strong language towards Hanoi, saying that Beijing had to go to the UN to defend its position.

“On the one hand, they carried out more disruptions on the scene. On the other hand, they spread rumous in the international community, slinging mud and attacking China,” she told reporters at a regular briefing in the Chinese capital.

“Given this, we find it necessary to tell the international world what really happened so as to set the record straight.”

China claims nearly all of the South China Sea, even waters approaching the coasts of its neighbors, and has become increasingly assertive in staking those claims.

Vietnam, the Philippines, Brunei, Malaysia and Taiwan have competing claims to parts of the sea.

Manila has brought its case before the UN Permanent Court of Arbitration  but Beijing says it does not intend to take part in the arbitration process.

China on Monday expressed displeasure after Vietnamese and Filipino troops played football and volleyball together on Sunday on a contested island in the Spratlys, with the foreign ministry denouncing the activity as “a farce”.

US military concerned over tension between China, Vietnam

PH ‘concerned but not nervous’ over China, Vietnam tensions