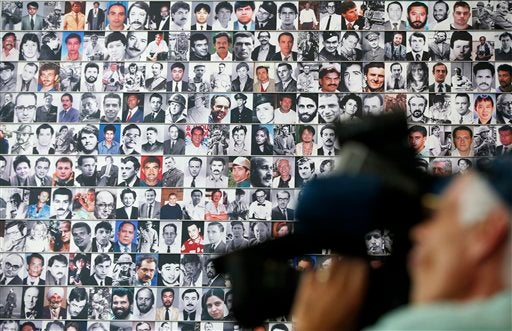 WASHINGTON—The Newseum on Monday honored the 77 journalists killed around the world in 2013 by adding 10 names—including that of a Filipino—to its towering memorial.

One of those added to the list was Filipino journalist Fernando Solijon, who had written about the illegal drug trade and was killed by gunmen in Iligan City in August last year.

The Washington ceremony also coincided with the killing of still another Filipino journalist, Nilo Baculo Sr., in Calapan City in Oriental Mindoro province on Monday.

Solijon’s widow, Mely, was not picking up her phone despite calls by the Inquirer on Tuesday.

Solijon suffered eight gunshot wounds in the head and body during the Aug. 29, 2013, attack against him. He was one of the more than 20 journalists and media workers killed under the administration of Philippine President Aquino.

Police have arrested the alleged gunman, a policeman, PO2 Peejay Capangpangan, a member of the Iligan police command, for the Solijon killing.

At a rededication ceremony for the memorial, Associated Press (AP) executive editor and senior vice president Kathleen Carroll called on journalists to fight indifference and reaffirm the importance of standing up to corruption and fear.

If journalists fail to do so, she said, “then you are giving up things that these people died to fight for, and that’s unconscionable.”

“Across the world, journalists are not submitting. They fight for the right to freely chronicle the actions of the powerful and the humble,” Carroll said.

Last year, 28 journalists were killed in Syria, making it the deadliest place in the world for journalists.

The memorial now contains the names of 2,256 journalists who have died while covering the news since 1837, said Gene Policinski, Newseum chief operating officer.

Policinski said advances in digital media had put more journalists at risk, since they now had larger audiences and could attract more attention.

Journalists continue their work despite that risk, Carroll said. She noted that AP photographer Anja Niedringhaus had said she kept going back to dangerous parts of the world “because it’s what I do.”

Niedringhaus was killed in April 2014 by an Afghan police officer within weeks of making that statement, Carroll said. In the same attack, veteran AP correspondent Kathy Gannon was wounded.

This year, the Newseum decided to add 10 names to the memorial, rather than the names of all who were killed while working.

Policinski said the change was made because the advent of digital media had made it more difficult to determine who was a journalist and who had died pursuing the news.

About 50 friends and relatives of journalists named on the memorial were present. Some reached for tissues as the circumstances behind the deaths were read.

Washington Post reporter Daniela Deane flew in from London for the ceremony. Her husband, Mick Deane, 61, was shot and killed by a sniper while covering a violent protest in Cairo last year. He had covered wars and other major events for CNN and Sky News for nearly 40 years.

“It’s been 10 months, so I can finally, sort of, take in some of this warmth,” Deane said.

Besides Mick Deane, the other journalists memorialized included Solijon, 48, whose reporting had linked some local politicians to illegal drug trade.

Solijon was shot multiple times by masked assassins who fled on a motorcycle.

The others memorialized in the Washington ceremony were:

— Mikhail Beketov, 55, from Russia, who reported on government corruption and died last year of complications from a 2008 attack

— Ghislaine Dupont, 57, and Claude Verlon, 58, both from France, who were killed in northern Mali while reporting on violence there

— Rodrigo Neto, 38, from Brazil, gunned down while working on a book about suspected police involvement in a murder

— Olivier Voisin, 38, from France, who died three days after he was hit with shrapnel while reporting in Syria.–With a report from Inquirer Mindanao