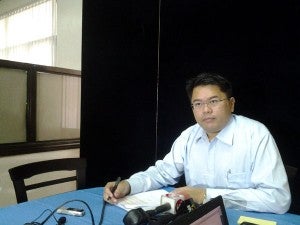 MANILA, Philippines–China’s land reclamation in disputed waters in the South China Sea shows it has disregarded its 2002 agreement with Southeast Asian nations to keep conditions in the sea unchanged until a final code of conduct is reached, a Department of National Defense (DND) official said on Monday.

“It’s a blatant disregard of the Asean Declaration on the Conduct of Parties in the South China Sea,” Peter Galvez, a spokesman for the defense department, said in an interview with reporters.

Galvez said that in 2002, the member states of the Association of Southeast Asian Nations (Asean) and China agreed to the declaration of conduct, under which all claimants to territory in the South China Sea would maintain the status quo in the disputed areas.

The claimants also agreed to “exercise self-restraint in the conduct of activities that would complicate or escalate disputes and affect peace and stability including, among others, refraining from action of inhabiting on the presently uninhabited areas, reefs, shoals, cays, and other features and to handle their differences in a constructive manner.”

The Philippines has not built fortifications on any of islands or reefs it is claiming because it follows the status quo agreement, Galvez said.

A military historian and security analyst, Jose Antonio Custodio, has said that while the Philippines takes the “moral high ground” by following the agreement, it is losing its territories to China in the process.

President Aquino has urged the Asean and China to conclude a binding code of conduct in the South China Sea, but there has been little progress in efforts to get China to negotiate.

Galvez declined to comment on a recent report in the South China Morning Post that China planned to expand the reclaimed land on Kagitingan Reef (Fiery Cross Reef) in the West Philippine Sea.

He said, however, that anyone who built the artificial islands automatically had the authority to manage them.

“Sky’s the limit,” Galvez said when asked what China could do on the reclaimed lands.

“They can construct anything [like] barracks, or put any equipment. They said they would put an airport, whatever. And then effectively, what would happen if you have those facilities in that area? You would be the one managing the area,” Galvez said.

Such a situation could cost Filipino fishermen their livelihood and the land reclamation could lead to environmental degradation that would have adverse effects on generations to come, Galvez said.

Galvez reiterated, however, that the Philippines would always follow the rule of law in defending its territories.