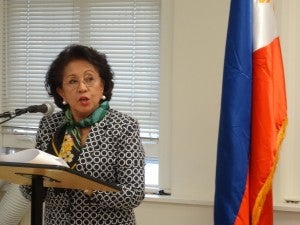 SAN FRANCISCO, California – Philippine Ombudsman Conchita Carpio Morales and members of her delegation on May 30 briefed members of the Filipino American community in the Bay Area on her office’s initiatives in pursuing its constitutional and statutory mandate to promote clean government and ethical public service.

She also discussed various programs and projects aimed at building a broad-based strategic partnership of “anti-corruption stakeholders.” Carpio Morales’ appearance at the Philippine Center also gave the community the opportunity to share their opinions and questions on anti-corruption efforts being undertaken by the Ombudsman.

During her visit, Morales met with officials from Federal and State agencies that deal with graft and corruption cases and

The Ombudsman and her delegation also had the opportunity meet California Magistrate Carolyn Delaney. They were briefed on relevant laws, procedures and other best practices in the investigation and prosecution of public corruption cases and the conduct of performance and financial audits of federal, state and local agencies.

The briefings gave the delegation valuable insights that could further strengthen the Office of the Ombudsman’s efforts to combat graft and corruption in the Philippines.