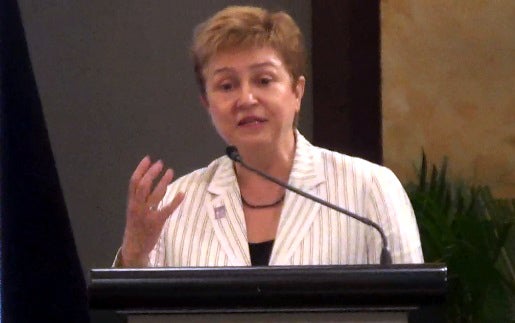 This was announced by Kristalina Georgieva, European Commissioner for International Cooperation, Humanitarian Aid and Crisis Response during her talk with about 150 members of the Asia Europe Meeting (Asem) who were in Tanauan on Wednesday.

She said the amount would be on top of the $1 billion that the EU donated to the Philippines for victims of Yolanda that wrecked havoc in parts of Visayas on Nov. 8, 2013.

Georgieva said the additional donation would be intended for health and education of the typhoon victims as well as the rehabilitation of the damaged infrastructure.

Georgieva was with delegates from 49 Asian and European countries who visited Tanauan, one of the hardest-hit towns in Leyte during the onslaught of Yolanda (international name: Haiyan).

Yolanda claimed the lives of at least 1,300 people in Tanauan and destroyed more than P500 million worth of infrastructure. Tanauan is located 21 km away from Tacloban, considered to be ground zero of Yolanda, considered as the strongest typhoon to ever make a landfall.

The Aquino administration put up the website to allow the public to monitor the status of foreign assistance the country has received following the outpouring of international aid in the wake of Yolanda.

But FaiTH doesn’t indicate how the aid was spent.

In her speech before Asem delegates, Georgieva said the world would continue helping the Philippines recover from the devastation caused by Yolanda.

“We will continue to stand with the Philippines for as long as it takes and to make sure that you are ready for the world of tomorrow,” she said.

The Asem delegates arrived in Tacloban on board a chartered Philippine Airlines flight from Manila on Wednesday morning.

They first went to Barangay (village) Bislig, about two kilometers from the town proper, for the laying of the time capsule for the construction of a building that would be used as learning center for Bislig Elementary School. The building would be equipped with computers.

From Bislig, the group visited a resettlement site in Barangay Pago for 200 families who lost their homes during the onslaught of Yolanda.

They returned to Tacloban past 2 p.m. to board the chartered PAL plane that took them back to Manila where they were attending a conference on disaster risk reduction and management.