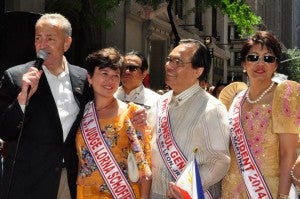 NEW YORK — Year after year, the June Philippine Independence Day Parade on Madison Avenue exudes an air of anticipation, excitement and spectacle. This year is no different.

“There’s more celebrities this year,” observed parade-goer R. Sonny Sampayan. “And more people, I think. It was hard to move around by the end of the parade to where the booths are.”

Filipino Americans had a grand time celebrating their Independence Day. The presence of Democrat Senator Charles Schumer gave the parade the blessing of officialdom even though no one from Mayor Bill de Blasio’s office came down to march with the community.

Schumer did not disappoint.

“One of the first immigration bills I ever passed was to allow our Filipino nurses to stay in the United States,” he said in brief remarks to reporters. Then he went on to acknowledge Judge Lorna Schofield standing beside him. He said he was honored to endorse her nomination as judge to the Southern District of New York to President Obama.

“I never realized beforehand that she is Filipino because her last name ‘Schofield’ doesn’t sound like it,” he said.

The parade began with a morning prayer seeking blessings for a successful congregation of Filipinos throughout the Northeast. Consul General Mario de Leon and Fe Martinez, president of the organizing association PIDCI, led the crowd gathered at the Philippine Consulate for a Eucharistic Celebration officiated by Monsignor Oscar Aquino.

Outside, a crowd of Fil-Ams with their families and friends had gathered waiting for the celebrities to emerge from the consulate building.

The sun shone brightly. Many Filipinos who came to Madison Avenue’s 23rd to 38th streets wore shorts, sandals and anything sleeveless. Some came with umbrellas to keep cool under the shade.

Marchers from various organizations, religious and civic clubs, school alumni clubs, marching bands, activist groups, and floats bearing celebrities streamed past the crowd. Members of the Fire Department City of New York’s Phoenix Society joined the parade for the first time. While Miss World Megan Young was a crowd favorite, it was Black

Eyed Peas’ apl.de.ap who rapped “Bebot” from his open car that got the crowd pumped and dancing along.

Over at Madison Square Park, FilAms have turned the place into a picnic ground as families shared plates of Filipino dishes with the drumbeat from the parade a reassuring soundtrack.

BriNoy Music performer Bessie Badilla was a hit with her “Mujerista” number, which she sang while her gay friends danced in the background. Original Pilipino Music composer

Cecile Azarcon asked the crowd to sing along with her medley of hits.

Kuh Ledesma dedicated “One More Try” to the LGBT community and rendered “Bayan Ko” as her powerful final. Lirio Vital serenaded with “Ang Tangi Kong Pagibig” and Ogie Alcasid opted for one of his memorables, “Nandito Ako.”

The presence of transgender woman Chelle Lhuillier, crowned Miss LGBT Philippines, was considered by many as a first. PIDCI offered her a float adorned with rainbow colored butterflies to represent the trans community.

Although she thought the parade was not very reflective of Philippine history, it was a feast for the eyes, according to artist Mona Lunot Kuker.

She enjoyed the floats that had participants dressed as Muslims from the south and Benguet warriors from the north. She would have wanted to see performers reenacting scenes from the lives of Filipino heroes Andres Bonifacio and Jose Rizal.