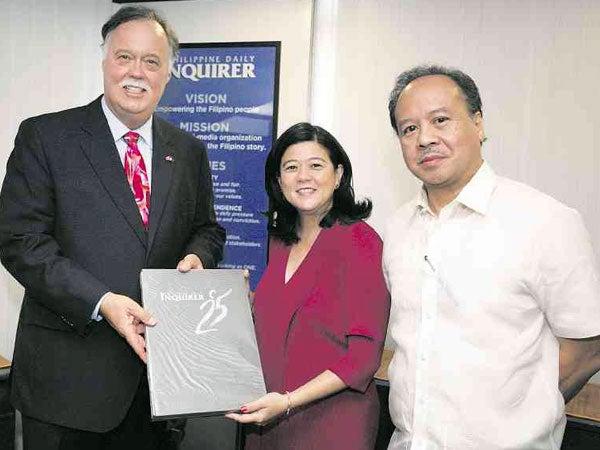 Canadian Ambassador to the Philippines Neil Reeder, Inquirer president and CEO Sandy Prieto-Romualdez and publisher Raul C. Pangalangan pose for a souvenir photo during the diplomat’s courtesy call at the newspaper’s office in Makati City on Wednesday. Reeder said during his visit to the PDI that Canada is keen about boosting its defense cooperation with the Philippines through further training of Filipino forces. KIMBERLY DELA CRUZ

MANILA, Philippines–Canada is keen about boosting its defense cooperation with the Philippines through further training of Filipino forces and support in military modernization through fresh supply contracts for new equipment, the Canadian ambassador to the Philippines said on Wednesday.

“We want to increase the training. We have very good programs in leadership training, language training, peacekeeping training—because the Philippines is a very active member in United Nations peacekeeping operations,” Reeder said during a visit to the Inquirer’s office in Makati City Wednesday.

Reeder noted how Canada could offer French-language training to Filipino peacekeepers who would be deployed to French-speaking corners of the world, including Lebanon, Haiti and parts of Africa.

“Secondly, as your defense modernization goes forward, we want to continue to assist should you seek certain technologies for equipment upgrades from the government of Canada,” Reeder said.

As an example, he cited the recent signing between the Philippine Department of National Defense and the Canadian government of a $105-million contract for the Armed Forces of the Philippines’ procurement of eight helicopters manufactured by Quebec-based Bell Helicopters.

“It depends on your needs. But we’re very pleased to see the modernization program go forward and if we could assist, we’d be certainly glad to,” Reeder added.

During his visit to the Philippines on Monday and Tuesday, Lawson met with Defense Secretary Voltaire Gazmin and AFP Chief of Staff Gen. Emmanuel Bautista. He also delivered a lecture on Canada’s role in the Asia-Pacific region at the National Defense College of the Philippines.

“This visit provided me with an excellent opportunity to exchange information and to strengthen our defense relationship and dialogue with the Philippines,” Lawson said in a statement Wednesday.

“From the major commitment of Canada’s military and civilian resources toward humanitarian and relief efforts following Typhoon ‘Haiyan’ (Yolanda) to our participation in regional military exercises and high-level defense forums, we will continue our efforts to bolster defense relations and increase cooperation with Canada’s partners, like the Philippines, in the Asia-Pacific region,” he said.

At the height of relief operations in the wake of Yolanda, the Canadian Armed Forces sent 350 soldiers to typhoon-hit areas in the Visayas to distribute clean water, clear debris, provide medical care and transport services, and distribute food and shelter materials to storm survivors.