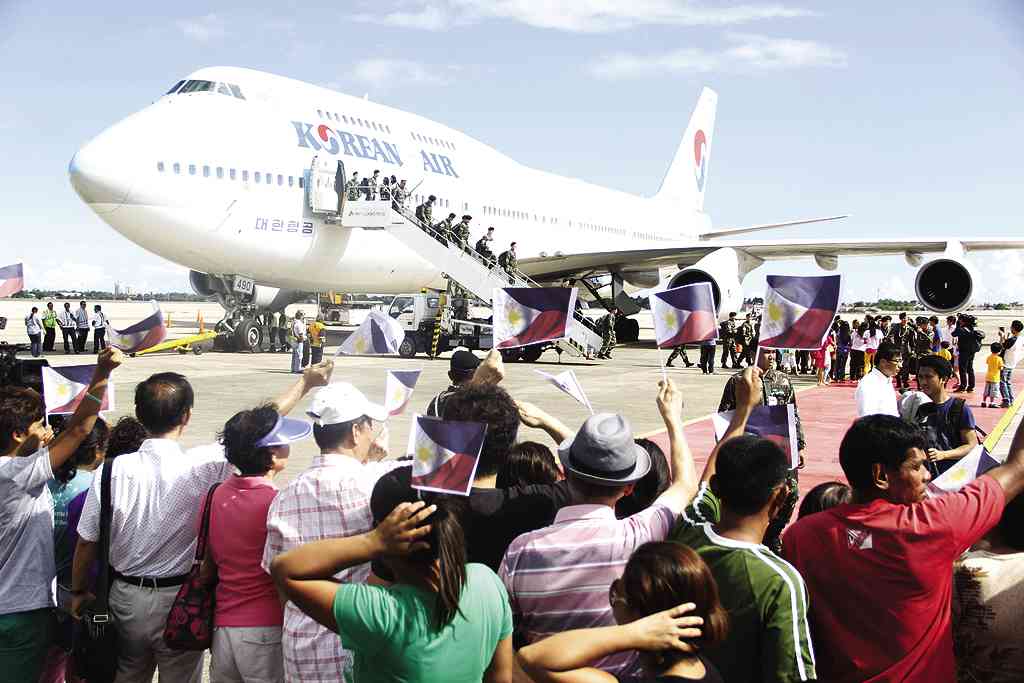 Cebuanos and Koreans based in Cebu province wave Philippine flags to welcome the arrival of the 300 Korean soldiers at the Mactan Air Base in December last year to help in the rehabilitation efforts of Yolanda-affected areas in Eastern Visayas. CARMEL LOISE MATUS/INQUIRER VISAYAS

MANILA, Philippines—South Korea will send a fresh military contingent to typhoon-stricken areas in Eastern Visayas that were affected by Super Typhoon Yolanda (Haiyan).

Nearly 300 soldiers, who are also engineers and medics, will be deployed to replace the troops who are there for six months now, Defense Secretary Voltaire Gazmin said on Wednesday.

In the aftermath of Yolanda last November, South Korea sent about 500 of its soldiers to Leyte to help in rehabilitation and medical operations.

Gazmin noted that this was because South Korea remained in gratitude because of the Philippines’ support in the Korean War.

The Philippine Expeditionary Forces to Korea of the Philippine Army was deployed to help during the 1950s. There were almost 8,000 troops, the fourth largest under the United Nations Command.

Gazmin was also in South Korea over the weekend to attend the Civil Military Technology Exhibition and to meet his counterpart and talk about humanitarian assistance and disaster response.

During his visit, South Korea also pledged to donate a landing craft utility, 16 rubber boats and 200 units of computers.