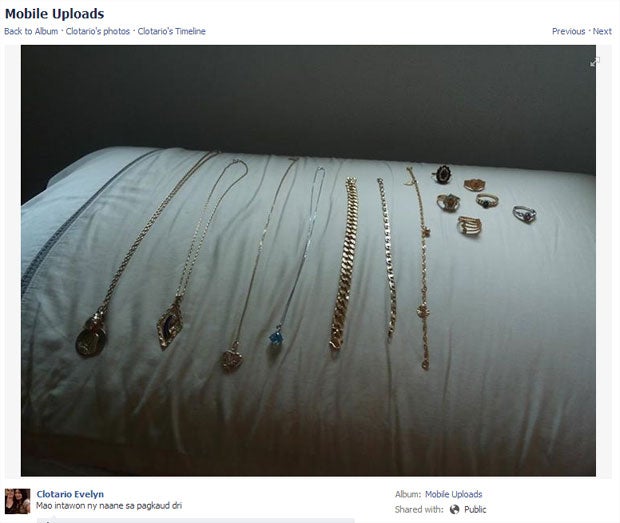 An overseas Filipino worker (OFW) based in Singapore was sentenced to three months in jail after posting photos of stolen jewelry on Facebook.

A report in The Straits Times said the 35-year-old Evelyn Macaraya Clotario pleaded guilty to stealing $6,300 worth of jewelry from her employer, British national Scalzi Barbara.

Only a portion of the collection, including necklaces, bracelets and rings, worth $2,000 was retrieved since Clotario had allegedly sent the other pieces to the Philippines.

Clotario worked as a domestic helper for Barbara at a condominium on Yew Siang Road from February 21, 2012 to January 21 this year.

The employer only learned about the theft after a friend pointed out Clotario’s posts on Facebook.

The article said Clotario was confronted by her employer on her last day of work as she had recently learned about the theft from a friend who saw the OFW’s Facebook posts.

A search on Facebook would reveal the profile of a certain Clotario Evelyn based in Singapore. One photo showed four necklaces, three bracelets and six rings placed on a pillow with the caption, “Mao intawon ny naane sa pagkaud dri.” A rough translation of the phrase is “Ganyan and nakukuha/naaani sa pagtatatrabaho/pagsisipag dito (This is what you get from working).”

Other photos show her wearing the rings, two in one hand, and two gold chain bracelets, as well as a necklace. Kristine Angeli Sabillo, INQUIRER.net

Maid in Hong Kong with Stage 4 cancer sacked by employer