Alien seniors should get discounts too 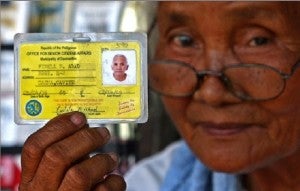 MANILA, Philippines–Living in the Philippines should be more fun for the elderly, regardless of their nationality.

Lawmakers are pushing for the approval of a recently filed bill that would allow elderly foreigners residing in the country to enjoy the same senior-citizen perks as their Filipino counterparts.

Under the Philippines’ Expanded Senior Citizens Act, resident Filipinos 60 years old and over get a 20-percent discount and exemption from the value-added tax for various goods and services, including the purchase of medicines, doctors’ and health care service fees, medical and dental services, public transportation fares, hotel services, funeral and burial services, and admission fees to the theater, cinemas and concerts.

They could also get employment, education and health assistance from the government. Commercial and government establishments are also required to provide express lanes for senior citizens.

Cagayan de Oro Rep. Rufus Rodriguez and Abante Mindanao Rep. Maximo Rodriguez Jr. said the elderly foreigners residing in the Philippines “[have] been overlooked, even if their contributions have been just as relevant and considerable.”

They noted that these foreigners come to the Philippines to put up businesses or settle here as retirees or immigrants.

“During their stay, they bring in considerable investments, patronize local businesses, contribute to the local economy, and in some cases take a role in nation-building,” they said.

By taking up permanent residence in the Philippines, they become as much a part of the public as Filipino citizens, they added.

Because of this, these foreigners deserve consideration and similar treatment in their older years, the lawmakers said.

Under their bill, elderly foreigners could avail themselves of the senior citizen perks in the country by presenting either an ID card issued by the Office of Senior Citizens Affairs in the place where they reside; a Philippine Retirement Authority identification card; an Alien Certificate of Registration I-Card; and other documents that establish that the resident alien is at least 60 years old and a Philippine resident.