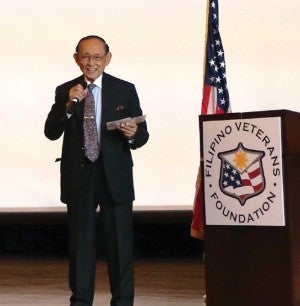 The Honor Guard of Carson High School saluted the former president, and young singers Nicolle Villalon and Michaela Marquez, introduced by Thelma Sugay, entertained him and the audience.

Consul General Leo Herrera-Lim introduced Ramos as “a graduate of West Point, a veteran of three American wars, namely, WWII, the Korean and Vietnam wars, and became the Chief of Staff of the Philippine Army after the fall of dictatorship, and eventually the Commander in Chief of the Republic of the Philippines for six years (1992 -1998).”

Herrera-Lim also said he considered Ramos as the best President the Philippines ever had. President Ramos was given a standing ovation.

Ramos gave a 30-minute inspirational and thought-provoking speech, which covered a wide range of topics.

He expressed support for the US-PH Enhanced Defense Cooperation Agreement: “Today, daring means engaging into the defense agreement, signed by President Barack Obama and President Aquino a month ago.  It translates to inter-cooperability of equipment, leadership, units, providing health care, protecting the environment and bringing us to par in modernizing the nation.”

Ramos explained, “The 20th century was about wars, and it’s over.  The 21st Century is about cooperation and fighting the real enemy: hunger, poverty, disasters. We all share this planet and we all need to protect our planet.”

“I have accepted to be the chairman of the Honorary Board of two Veterans organizations. The first one is led by Retired Gen. Renato de Villa, with 300,000 membership. It is called the Filipino World War Two Veterans or Filvets foundation.  The second is based here in the US. I am honored to be the Chairman of the Honorary Advisory Board of the Filipino Veterans Foundation in Los Angeles.  We will address not only the veterans of WWII, but veterans of all wars, the newly arrived veterans of Iraq.

He praised Filipinos around the world, “11 million in 175 countries (and) known to be reliable, to work efficiently and are appreciated by the family of nations.  We come from a third-world country and hope to elevate ourselves as a first-world country because of who we are — a freedom loving country.”

Veterans of WWII as well as recent veterans eagerly shook his hand and gave him a warm welcome.

Christine Love sang the US and Philippine national anthems, followed by an invocation by Eddie Duque.  Councilman Victor Manalo, former mayor of Artesia, and Mayor Tony Cartagena of Walnut, both warmly greeted the former Philippine president.

The veterans raised their difficulties in getting their old-age pension Philippine benefits forwarded to them here in the US because these are allegedly stopped unless they can prove each year that they are still alive.

Ramos asked Consul General Leo Herrera-Lim to expedite the process of certifying their survivorship.  He also pounded the table in frustration when the veterans reported not receiving benefits because these reportedly have been embroiled in the pork-barrel scandal, which is still being investigated.

Dr. Batongmalaque brought up the current investigation of the US Veterans Administration’s inability to attend to the needs of the veterans.

“For this timely concern, the Filipino Veterans Foundation is ready, able and willing to serve Veterans of all wars at the Patriotic Hall, for its Board is composed of active practicing physicians, proprietor of an Adult Care Center, and community leaders in education, welfare and human services,” she said.

Finally, Ramos attended the community reception at the Purple Heart Inn.  He was greeted warmly by Ret. Col. And Mrs. Ralph Ramirez and Dr. and Mrs. Fred Martin, strong supporters of FVF.  Jay Wurtz (author of Pacific Wars) gave him with a copy of his book.

Then he was led by Dr. Batongmalaque to an exchange of gifts, five books from Ramos to the library of FVF and the E.R. Batongmalaque Foundation, with two DVDs on the Philippines. Dr. Batongmalaque gave him as a token of appreciation a set of four tall Americana glasses, to remind him of the Filipino-Americans when he “sips buko juice on a hot summer day.”

The proceedings were emceed by Benito Miranda. FVR signed pictures taken 12 years ago in Carson at the 60th Anniversary of USAFFE sponsored by the Erasto R. Batongmalaque Foundation, and was reminded that it was he who planted the seed to build the Bayani Center in America.