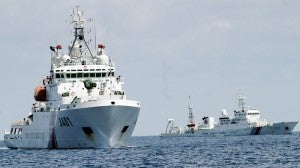 The Japanese coast guard said the vessels entered the 12-nautical-mile band of territorial waters around one of the Senkaku islands, which China also claims and calls the Diaoyus, around 10 a.m. (0100 GMT).

The two ships moved out of the zone about three hours later, it added.

Chinese vessels and aircraft have regularly approached the East China Sea archipelago — thought to harbor natural resources — since Tokyo nationalized some of the islands in September 2012, setting off the latest spate of incidents in a long-running territorial dispute.

Saturday’s incursion was the first of official Chinese vessels into the disputed waters since May 2 and the 12th this year.

There have been incidences of Vietnam and China ramming each other’s vessels recently while in 2012 the Philippines lost control of rich fishing grounds after a tense standoff with China.

Brunei, Malaysia, the Philippines and Vietnam — claim parts of the sea, with Manila and Hanoi being the most vocal in opposing China’s claims. Taiwan is also a claimant.

At the annual Shangri-La Dialogue in Singapore Saturday, US Defense Secretary Chuck Hagel accused China of “destabilizing actions” in the South China Sea.

He also warned that Washington would not “look the other way” if international order is threatened.