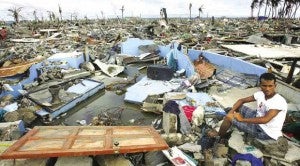 ‘YOLANDA’ SURVIVOR Melvin Castro sits in the rubble of his home in Tacloban City where 18 of his family members were killed. INQUIRER FILE PHOTO

Award-winning Filipina singer Lea Salonga and Black Eyed Peas member apl.de.ap (Allan Pineda in real life), are among the performers who will participate in the concert dubbed “After the Storm: A Benefit Concert for the Philippines” which will be held at the Kennedy Center for the Performing Arts in Washington, D.C. on June 15, 2014.

“We are delighted that the concert will be graced by such big talents. I am encouraging everyone to buy their tickets as soon as possible, as the first and second tier tickets are already sold out,” Philippine Ambassador to the United States Jose Cuisia Jr. said in a statement.

“By purchasing a ticket, you will be helping rebuild the devastation that occurred in the Philippines after Typhoon Haiyan,” he said.

Organized by the Philippine Embassy in the US in cooperation with the US-Philippines Society and the Philippine Humanitarian Coalition, the concert will be directed by Broadway legend Baayork Lee and produced by Emmy-nominated producer, Robert Pullen, the embassy said.

Pempengco rose to fame after she was discovered on YouTube and was dubbed as “the most talented girl in the world” by Oprah Winfrey.

Natori is a multi-awarded designer and founder of The Natori Company which supplies lingerie items, ready-to-wear collection, home, fragrance, and eyewear to international stores.

ADVERTISEMENT
Read Next
Binay advises Filipinos in conflict-stricken Libya to leave
EDITORS' PICK
House to probe Facebook takedown of gov’t accounts
Despite toll, never too late to fight pandemic—WHO chief
Water remains our saving grace right now
Feud is over: Velasco next Speaker on Oct. 14
Smart poised to turn PH into ‘Smart 5G country’ with nationwide rollout
Get 80% OFF Ignite 2020 Cyber Tickets starting 28 September
MOST READ
Velasco to take over as Speaker on Oct. 14
2 PDP-Laban allies in House jump over to Lakas-CMD
LOOK: The Mountain from ‘Game of Thrones’ welcomes first son with wife
Gun attack in PMA: Air Force man killed, 2 others wounded
Don't miss out on the latest news and information.