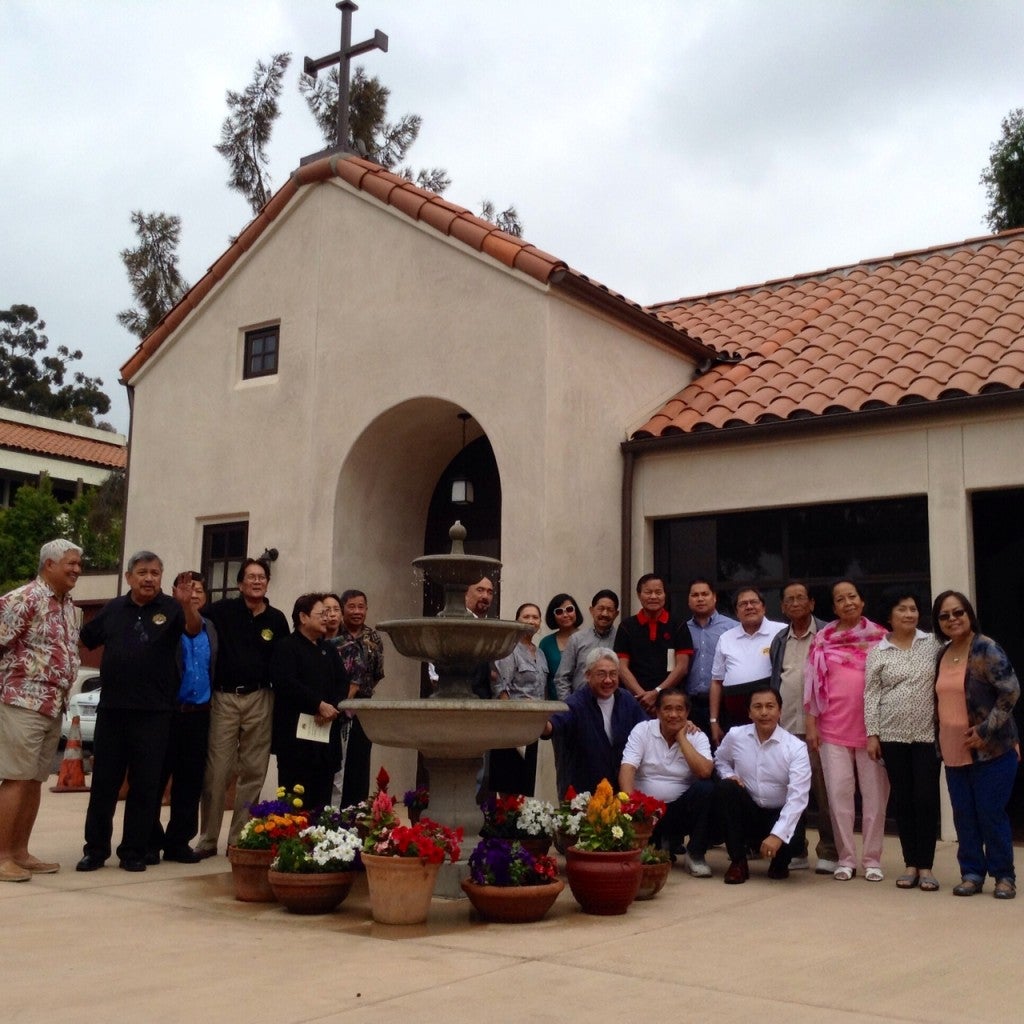 Pastor Alex Achacoso (left) with Sigma Rho of SoCal and their families.

SAN DIEGO, California — Pastor Alexander Achacoso, a University of the Philippines alumnus, on Saturday May 24, led his visiting college fraternity buddies in dedicating a commemorative fountain that caps the rebuilding of a church razed by fire early one morning on Christmas two years ago.

“The fire burned down our church, but not our faith,” Pastor Achacoso, who immigrated to Bronx New York some 36 years ago, told his friends and their families. 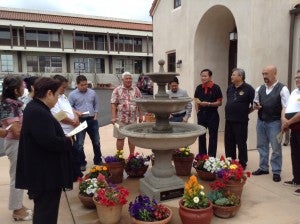 “God is good; He provides at the right time and proof is how the community around Old Town, our friends near and far, gathered their resources to append insurance mitigation,” he told his guests from the UP Sigma Rho of Southern California Chapter and their families.

The old church is situated in a tourist area visited for its history and local crafts in a laid-back, almost pastoral setting. Besides the sanctuary, several items inside the church, which was built in the 1970s, were destroyed, including a carved sculpture called an intaglio that depicted the Madonna and child. The work hung in a handmade wooden frame above the altar, said Achacoso’s wife, Irene.

The Old Town community, a quaint parcel of the early Spanish settlement in the area south of Los Angeles has approximately 1,500 residents. The other church in town is the Immaculate Conception Catholic Church that has since collaborated with some activities including feeding programs.

Immediately after the fire, the church’s Facebook site was inundated with supportive messages. One was from a local conservationist group, “ The Save Our Heritage Organization.” It offered the use of the Old Adobe Chapel just around the corner from the single-story Old Town Community Church.

Achacoso’s fraternity donated funds to build the “Eternal One” fountain, which welcomes churchgoers. Fernando Sosmena, archon of the So Cal chapter, led some 20 members in the dedication ceremony.

Fast-forward to 2014, after two and half years of fundraising and re-building. Achacoso beamed as he led friends on a tour of the new sanctuary. Many of his guests drove more than 150 miles one way to mark this event.

Achacoso has served at the non-denominational Christian church since 1993. It has more than 90 family members – 60 percent are Filipino American and the rest are Chinese, Korean, African American and Hispanic.

Achacoso celebrates Mass every Sunday from 11 a.m. Community leaders also conduct ministries for children, youth and seniors, which for two years had to be held at the adjacent school 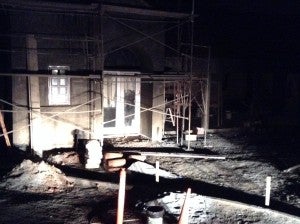 “From the ashes…we will rebuild,” said Pastor Alex. This was the sanctuary that the Christmas fire gutted down. Photo by Cecile Ochoa

Not only did the community restore the demolished sanctuary, it was also able to add square footage by including a crying room for parents with babies and toddlers, as well as an additional function room. The church now has 3,500 square feet with a new modern kitchen and dining area, Achacoso explained.

“We’re thankful — the rebuilding is a testament of God’s faithfulness,” he said.

With his wife Irene of 36 years, Achacoso moved to the Bay area in 1983 where religious life called on him and he entered the seminary. Ten years after, their journey led them to San Diego where the predominantly Caucasian church was closing down. With a family of six children, Alex and Irene have served the Old Church since 1993. They now have 12 grandchildren and a growing community church.

His goal as a pastor is to continue initiating mission churches where these are needed – Chula Vista, for example; leading more people to “His Kingdom.”

At Old Town Church, he plans to open a veterans’ facility to address some of the mental challenges this group faces, a rehabilitative mission. His mission is to strengthen the veterans’ spiritual side as well as their faith.