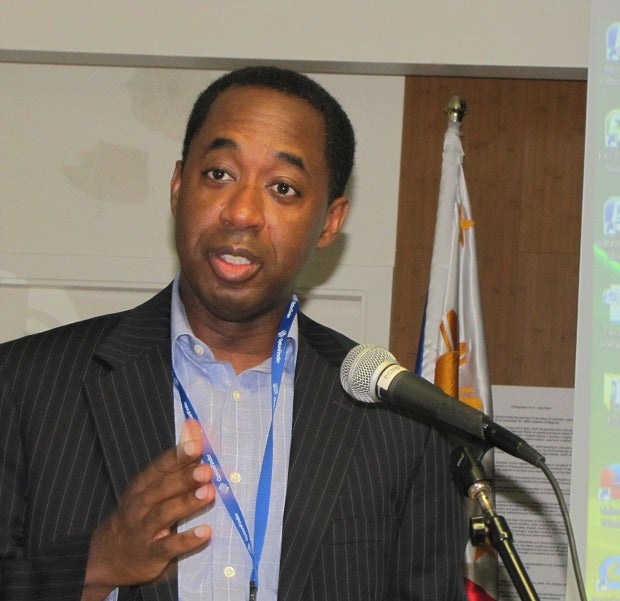 SAN FRANCISCO, California—It is a well known fact that the Philippines is the third largest remittance receiving country in the world after India and China, with total remittance receipt in 2012 valued at $24.5 billion. Of this,  $10.6 billion were estimated to have come from the US alone.

While remittances have helped individuals and families in the Philippines and propped up the country’s economy, how much really went to making recipients economically independent? How much went to savings? Entrepreneurship? Education?

A lot of sad stories have come from surprised remitters who find their hard-earned dollars squandered on useless and non-essential things, or non-existing needs.

At a recent town hall meeting at the Philippine Center’s Social Hall in San Francisco, Alexander Dixon, director of the Rockefeller-Aspen Diaspora Program (RAD) said that many in the diaspora do not donate to Philippine nonprofits because of distrust stemming from perceptions of corruption and a lack of transparency.

In this regard, the Rockefeller Aspen Diaspora Program (RAD), a collaborative effort between the Rockefeller Foundation and the Aspen Institute, recently launched a study that will design a targeted and coordinated approach to facilitating the strategic investment of financial and human capital from diasporas to their home countries.

RAD’s primary goal is to more effectively channel investments from diaspora communities into their countries of origin. Housed at the Aspen Institute, RAD will build upon lessons learned to effectively engage diaspora members.

What motivates expatriates to invest in the Philippines’ development? Is it family, a desire to help the Philippines, or is it the existence of a good investment opportunity?

RAD believes that there is an opportunity to increase the amount of donations to countries of origin by creating origin country-specific Donor-Advised Funds (DAFs).

The RAD Colombian, Egyptian, Indian, Kenyan and Filipino DAFs will attract donations from members of the pilot diasporas by increasing the quality and quantity of vetted NGOs in the countries of origin and decreasing the cost of donations for donors.

DAFs provide an indirect return to donors via tax deductions and create a channel for diaspora capital into investments back in their countries of origin.

Diaspora communities wield a significant amount of financial and human capital, as well as considerable interest in investing in their home countries to address economic and social challenges.

RAD will play a critical role in understanding the barriers that currently inhibit diaspora members from making strategic investments in development projects and in developing an effective approach to overcome those barriers.

RAD country-specific DAFs will aggregate donations from multiple diaspora donors, which will enable diaspora members of all income levels to donate to their countries of origin.

RAD is exploring leveraging SharedImpact’s platform to allow small donations. This will greatly increase the access point of DAFs, which are usually targeted at upper income earners, by allowing diaspora donors with as little as $100 to donate to DAFs.

RAD DAFs will further decrease the cost to small donors by passing the cost of due diligence onto large donors and the field partners.

RAD country-specific DAFs can serve as a vehicle for diaspora high net-worth individuals (HNWIs) to engage in both grant making and impact investing by leveraging their existing tax deduction allocations.

The loan and guarantee fund will provide NGOs with much-needed capital in the form of low-interest loans, while providing guarantees for loans from local banks such as YES BANK.

Hence, diaspora donors will be able to double their impact through RAD DAFs – their grants will support origin NGOs while their investments will catalyze economic and social development in their countries of origin.

RAD believes that it can expand the universe of foreign NGOs available to diaspora donors by partnering with credible in-country organizations, such as banks and charitable foundations (e.g., YES BANK Foundation), which can vet NGOs.

The RAD pilot will give in-country organizations an incentive to thoroughly assess local NGOs, as DAFs will provide supplemental funding for their grantees. The seeds of this effort support a RAD envisioned NGO Transparency platform that it is exploring with Charity Navigator.

To get a feel for how the different targeted diaspora will relate to such plans, RAD is seeking the community’s input through a survey. The survey is anonymous and is intended to measure the Filipino diaspora’s motivations and interests in contributing to development efforts in the Philippines.

From Alex Dixon, Director, Rockefeller Aspen Diaspora Program:  We should clarify some points that were mentioned in the article. The points of clarification are below.

1.       We view CAF as a premier organization within the DAF sector. We think that there is potential demand within the Filipino community for the DAF structure given the change in focus that occurred with the transition of the Ayala Foundation. As we understand, Ayala formerly served as a conduit for members of the Filipino diaspora to support approximately 200 Philippines-based NGOs. The development of a DAF – or as we like to say, a “Diaspora-Advised Fund” – would create a replacement conduit that would aggregate capital for impact investing but also provide grants to Philippines-based NGOs, including those formally serviced by the Ayala Foundation.

2.       As part of RAD’s research phase, which will end in December 2014, we are speaking with  a number of potential partners. We do not expect to conclude any partnerships until January 2015. The names mentioned in the concept notes were provided as examples. They should not be presented as confirmed partners.

3.       While the Rockefeller Foundation is the primary funder, the Aspen Institute is the implementing partner and the main driver of the program and its content.