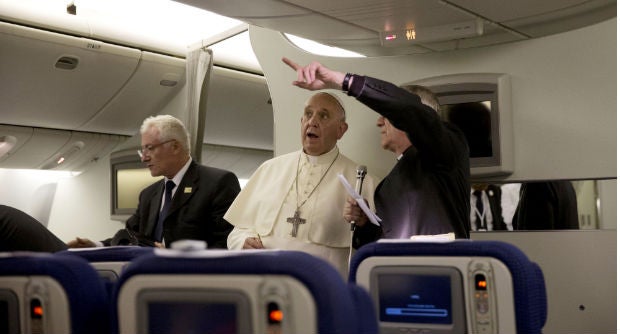 Pope Francis talks with Vatican Spokesman Father Federico Lombardi, right, during a press conference he held aboard the papal flight on his way back to Rome at the end of a three day trip to the Middle East, Monday, May 26, 2014. He confirmed a visit to the Philippines in January 2015. AP/ANDREW MEDICHINI, POOL

ABOARD THE PAPAL PLANE—Pope Francis confirmed Monday that he will visit the Philippines in January next year as well as Sri Lanka for two days, but gave no definite dates and details. Philippine Catholic Church officials have reportedly invited him to visit the Philippines, with a trip to typhoon-devastated Leyte as the highlight of his visit.

Early this year Palo Archbishop John Du was quoted by the Philippine Daily Inquirer as saying that “the Holy Father might just come,” adding that there was a plan but that “there is no calendar yet (for this possible visit). But we are praying for it.”

Du talked about the Pope’s possible visit during the visit of Robert Cardinal Sarah to Leyte on Jan. 28, 2014, during which he expressed Francis’ “oneness and solidarity” with the people of Leyte and the rest of the areas hit by Super Typhoon Yolanda on Nov. 8, 2013.

Cardinal Sarah is the president of the Vatican’s Pontifical Council Cor Unum responsible for charity and humanitarian assistance. He said Mass at the damaged Saint Elizabeth of Hungary Church in Libertad village, about four kilometers away from Palo town proper.

Francis also announced Monday he would meet soon with a group of sex abuse victims at the Vatican and declared “zero tolerance” for any member of the clergy who would violate a child.

Francis also revealed that three bishops are currently under investigation by the Vatican for abuse-related reasons, though it wasn’t clear if they were accused of committing abuse itself or of having covered it up.

“There are no privileges,” he told reporters en route back to Rome from Jerusalem.

The meeting with a half-dozen victims will mark the first such encounter for the pope, who has been criticized by victims for not expressing personal solidarity with them when he has reached out to other people who suffer.

Francis said the meeting and a Mass at the Vatican hotel where he lives would take place early next month. A statement from the office of Boston Cardinal Sean O’Malley, who is organizing the encounter, said the date and details hadn’t been finalized but that the meeting was expected to take place “in the coming months.”

“On this issue we must go forward, forward. Zero tolerance,” Francis said, calling abuse of children an “ugly” crime that betrays God.

The executive director of the main U.S. victims’ group, Survivors Network of Those Abused by Priests, or SNAP, dismissed the meeting as “just utterly, utterly meaningless.”

“The simple truth is this is another gesture, another public relations coup, another nice bit of symbolism that will leave no child better off and bring no real reform to a continuing, scandal-ridden church hierarchy,” said SNAP Executive Director David Clohessy.

Clohessy said the pope has shown himself capable of making real change in other areas such as church governance and finance but hasn’t done so in dealing with sex abuse by Catholic clergy.

Francis spoke to reporters for nearly an hour after his grueling, three-day trip to Jordan, the West Bank and Israel, taking all 11 questions posed and responding with candor and occasional humor.

He said he would travel to Sri Lanka for two days and the Philippines in January 2015. And he suggested that he might follow in emeritus Pope Benedict XVI’s footsteps and retire if he no longer had the strength to do the job.

“We need to look at him as an institution: he opened a door, the door of emeritus popes,” Francis said. “Only God knows if there will be others, but the door is open.”

If and when the time comes, he said, “I will do what the Lord tells me to do, pray and try to find God’s will. But I think that Benedict XVI wasn’t a unique case.”

Francis sought to lower expectations about his planned encounter in the Vatican next month with the Israeli and Palestinian presidents, which he announced during the trip. He stressed that they were coming to pray together, not enter into peace mediation.

“We are coming just to pray, then everyone goes home,” he said. “But I think prayer is important, praying together.”

He said he had originally hoped to arrange the encounter in Jerusalem itself, but that the idea was scrapped because of the enormous logistical problems that would have been involved. Preparations are already under way, he said, noting that a rabbi and Islamic cleric would join him in leading the prayers.

One of the more poignant moments of Francis’ pilgrimage came Monday when he visited the Yad Vashem Holocaust memorial in Jerusalem and kissed the hands of survivors in a show of humility and respect. Francis said his gesture came spontaneously.

“The gestures that are the most authentic you don’t think about,” ahead of time, he said.

Given his respect for Holocaust survivors, Francis was asked what he intended to do about the pending beatification case for Pope Pius XII, the World War II-era pope accused by some Jews of not speaking out enough against the Holocaust. Jewish groups have asked that the case be shelved pending the opening of the archives of his pontificate, or at least until the generation of Holocaust survivors has passed.

Francis has bent the Vatican’s saint-making rules for a half-dozen people so far in his pontificate, waiving the usual second miracle requirement for example to canonize Pope John XXIII last month. Francis, however, offered no such wiggle room for Pius.

“There’s still no miracle,” he said. “If there are no miracles, it can’t go forward. It’s blocked there.”—With a report from INQUIRER.net

Pope may drop by PH in August, says CBCP official

Why I hope Pope Francis visits the Philippines soon