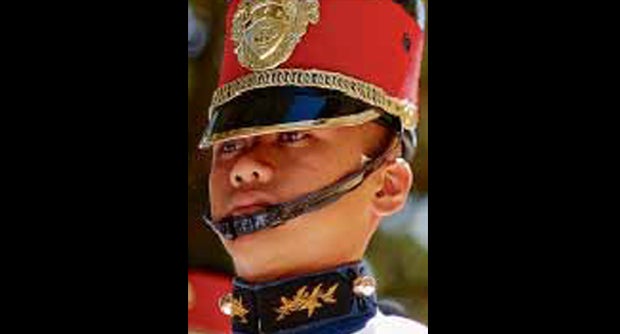 FORT DEL PILAR, Baguio City—Cadet Pongpeera Disapirom of Thailand on Saturday was formally incorporated into the Philippine Military Academy here as a full-fledged cadet belonging to Class of 2018.

But Disapirom, 19, did not draw much attention during the rites attended by Philippine Army chief Lt. Gen. Hernando Iriberri.

Lopez said he had not discussed the matter with the cadet, “who was busy with activities at beast barracks for the last two months.”

Pongpeera’s parents, Samrueng and Alele Hara, joined him for a late lunch at the picnic grounds along with the other plebes.

Plebes are the lowest ranking cadets who take orders from the senior cadets at the academy.

Pongpeera was a cadet at the Chulachomklao Royal Military Academy of the Royal Thai Army when he accepted an invitation to join the PMA, according to the Department of National Defense (DND).

The DND said Pongpeera “joins a distinguished list of Thai alumni of PMA, including Gen. Tumrongsak Deemongkol (Class 1976), who was the No. 8 graduate of his batch; Gen. Thawip Netniyom (Class 1981), who graduated valedictorian and is now a senior staff officer of the Chief Defense Forces of the Royal Thai Armed Forces; and Maj. Mongkol Khum-arwut (Class 2001), who is with the Royal Thai Army.”

Pongpeera had taken a preparatory course before joining the PMA, said Thai Army Col. Pongsak Munklhan, one of the two Thai military attaches who escorted the cadet’s parents to Baguio City, adding that the cadet was “like the new generation of young people who know English well.”

Pongsak said the foreign cadet exchange programs were expressions of cooperation being advocated by the Association of Southeast Asian Nations.

“And [Cadet Pongpeera] is doing quite well,” he said.

Iriberri said incorporation day marks the start of the PMA academic year, which plebes should cherish because they now belong to the academy.

Iriberri cautioned the cadets about resting on their laurels, saying that every action they take at the academy and in the military service after graduation would be “examined through a prism by the public, much like the academy has been scrutinized time and again.”

Early this year, the PMA was criticized for dismissing a graduating cadet who was accused by a jury of his peers of lying, a violation of the academy’s honor system.—Vincent Cabreza

CHR: PMA Cadet Cudia not guilty of lying, should be granted diploma

New Zealand locks down all nursing homes after virus return