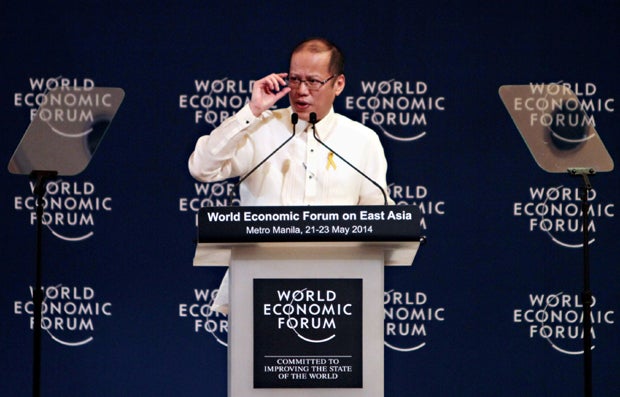 MANILA, Philippines—President Benigno Aquino III said on Thursday that anti-corruption efforts by his government freed up resources that were now being used to “invest” in Filipinos.

“These reforms, along with countless others, naturally expanded the resources available to government,” Aquino told more than 600 delegates of the World Economic Forum on East Asia held at Makati Shangri-La.

“The question was: What do we do with these resources we have freed up? To everyone in our administration, the answer was very obvious: We had to invest in our greatest assets—and that, once again, was the Filipino people,” he explained.

The President said this was done through the Conditional Cash Transfer (CCT) or the Pantawid Pamilyang Pilipino Program (4Ps), which provides sustainable livelihood assistance to its beneficiaries.

“Now, we are assisting around 4.3 million families, or about 22 percent of the population and this constitutes the poorest of the poor,” he said.

Investments in health and education were also made.

“Of course, the principle behind the CCT dovetails with the strategic investments we have made in education to enhance the skillsets of the next generation,” Aquino said.

He claimed that his government has been addressing the backlogs on classrooms, chairs and other equipment.

Worst efforts of our leaders

At the same time, Aquino said his administration “dismantled corruption,” a “promise we made to the people.”

“We had to take on all those who had a misplaced sense of entitlement—who believed that they had more rights than their fellow Filipinos,” he said.

“So, we went after every individual who committed wrongdoing, and look at the results: My predecessor is now undergoing hospital arrest as she undergoes two serious charges, with another being evaluated by the Ombudsman. The Congress and the Senate removed a Chief Justice from office for failing to declare over 98 percent of his assets in his Statement of Assets and Liabilities and Net Worth contrary to our constitution and our laws,” Aquino added.

Aquino said Philippine growth was made possible “despite the worst efforts of our leaders.”

In the end, the President said opportunities are crucial to further spur equitable growth.

“We are aware, however, that inclusive growth cannot be achieved simply by delivering to our people the services they rightfully deserve. Government must also actively find ways to create opportunities for the people,” he said.

Aquino pointed out that the government has been working hard to promote the Philippines as a tourist destination.

“The results are clear: From 2001 to 2009, the term of my predecessor, the average annual growth of international tourists arrivals was at 5.1 percent; under our watch, from 2010 to 2013, this number grew to 11.6 percent,” he said, adding that international tourists spend an average of a thousand dollars each.

Aquino made no further mention of how many more opportunities may be offered but during the morning sessions of the WEF, his Cabinet members tackled the country’s efforts in strengthening the agriculture and manufacturing sectors.

“We have always said that good governance is good economics, and the results of our reforms on the economic end are proving us right. In 2013, our economy grew by 7.2 percent—making us one of the fastest growing countries in Asia,” the President said, pointing out that growth was achieved amid numerous disasters that struck the country last year.

He said another proof of the Philippines’ progress was the “renewed perceptions” of the international community.

Recently, Standard & Poor’s upgraded its rating for the Philippines from BBB- to BBB. The WEF competitiveness rankings also raised the country by 26 places from 85th to 59th.

“Not to mention, from 2010 to 2014, we have made great strides in the World Bank and the International Finance Corporation’s Ease of Doing Business Report and in the Heritage Foundation’s Index of Economic Freedom, improving by 36 spots and 20 spots in each one, respectively,” he said.

Aquino said the Philippine economy is building on its momentum with the revival of its manufacturing sector amid greater infrastructure spending, from P200 billion in 2011 to P400 billion this year.

“Our country is in the midst of a dramatic turnaround in every sector, and we are intent on continuing this trend and making certain that each and every Filipino enjoys the full dividends of progress,” he added.

A few minutes before Aquino took the stage, protesters and police scuffled outside the hotel.

The activists said the Philippine economy was no “miracle,” especially with the high unemployment rate.

“What miracle is the regime talking about? We have the highest unemployment rate in the region, and the highest in Philippine history, despite repeated claims of economic growth. The supposed growth is centered on a few sections of the economy and account for a small percentage of jobs created,” Bagong Alyansang Makabayan said in a statement.

The Philippines is hosting the WEF on East Asia for the first time. More than 600 delegates from 30 countries participated in the three-day event.