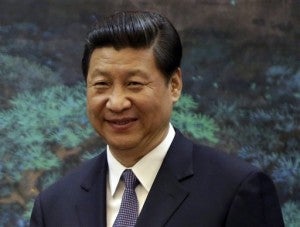 SHANGHAI — China’s president called Tuesday for the creation of a new Asian structure for security cooperation based on a regional group that includes Russia and Iran and excludes the United States.

President Xi Jinping spoke at a meeting in Shanghai of the Conference on Interaction and Confidence-building measures in Asia, an obscure group that has taken on significance as Beijing tries to extend its influence and limit the role of the United States, which it sees as a strategic rival.

Xi made no mention of Beijing’s conflict with Vietnam over the deployment of a Chinese oil rig in disputed seas.

CICA, whose 24 member nations also include Korea, Thailand and Turkey, should become a “security dialogue and cooperation platform” and should “establish a defense consultation mechanism,” Xi said. He said the group should consider creating a “security response center” for use in the event of major regional security emergencies.

The proposal marks the latest effort by Beijing to build up groups of Asian or developing governments to offset the influence of the United States and other Western governments in Asian and global affairs.

In 2001, it founded the Shanghai Cooperation Organization with Russia and four Central Asia nations to counterbalance rising American influence in the region and to combat Islamic and separatist political movements.

China is involved in territorial disputes with Japan over the East China Sea and with Vietnam and other Southeast Asian countries over conflicting claims to portions of the South China Sea.

Washington has complained about what it says are provocative Chinese moves, such as deploying an oil rig to disputed waters in the South China Sea. China complains the Obama administration’s effort to shift foreign policy emphasis toward Asia and expand its military presence in the region is emboldening Japan and other neighbors and fueling tension.

CICA, formed in 1992 at the initiative of Kazakhstan, has until now been little more than a discussion forum. Other members include U.S. allies such as Israel, Mongolia and Uzbekistan. Japan, seen by Beijing as a regional strategic rival, is an observer.

“We should have zero tolerance for terrorism, separatism and extremism and should strengthen international cooperation and step up the fight against the ‘three forces’,” he said.

China leader warns US, others over Asian security

Read Next
China leader warns US, others over Asian security
EDITORS' PICK
Smart poised to turn PH into ‘Smart 5G country’ with nationwide rollout
New Vatican ambassador to PH named
We don’t want gov’t to fail, because it’s all of us who will suffer and die — Robredo
Duterte keeps Metro Manila under GCQ for entire October
Get 80% OFF Ignite 2020 Cyber Tickets starting 28 September
Water remains our saving grace right now
MOST READ
Duterte keeps Metro Manila under GCQ for entire October
Duterte tells Facebook: Why keep operating in PH if you can’t help us?
Mayor Treñas tells Locsin: Iloilo City is much better than what you think
Fernandez: Velasco camp ‘betrayal’ pushes call to retain Cayetano as Speaker
Don't miss out on the latest news and information.