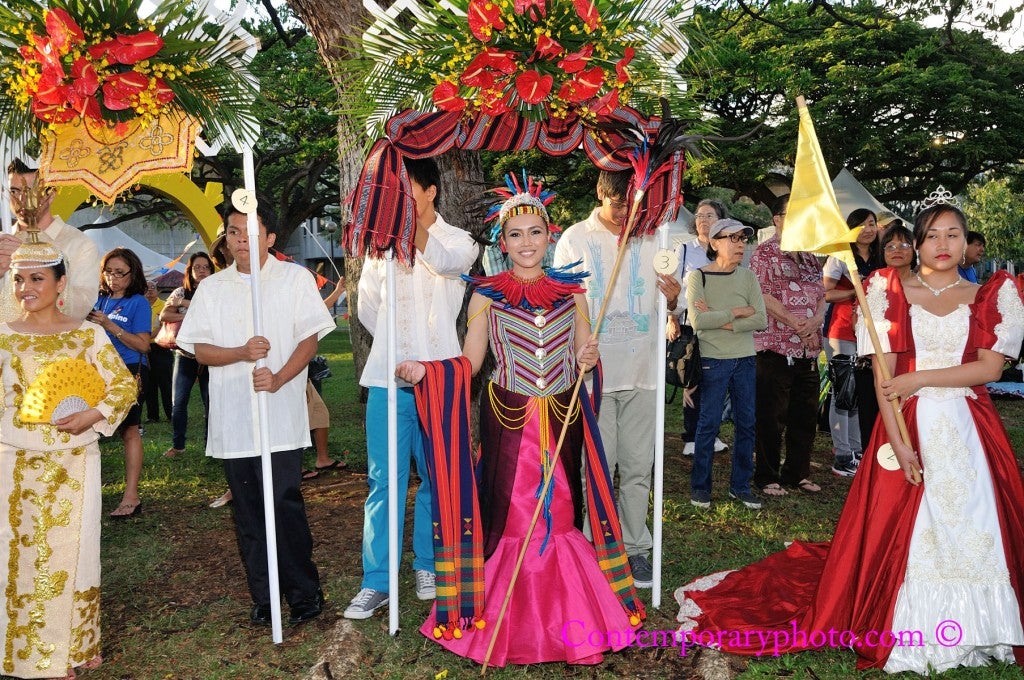 Photo show some of the reynas and princesas with their colorful arches during the Santacruzan Parade. (Photos from Contemporary Photo)

HONOLULU, Hawaii — With the theme “Isang Puso, Isang Diwa” (One heart, One mind), the 22nd Annual Filipino Fiesta gathered Filipinos is Hawaii to a daylong fiesta complete with a great orchestra, the Royal Hawaiian Band, playing the US and Philippine national anthems and Hawaii’s State song on May 10 at its new location, the Honolulu  Civic Center grounds.

Sponsored by the Filipino Community Center, the Fiesta is the oldest running and most popular event celebrating Filipino culture.

There was a mix of sponsors from mainstream corporations to local government, business and community booths, which complemented the lively atmosphere with games, surprises, raffle prizes, giveaways and donations to Haiyan/Yolanda Rebuilding Fund. INQUIRER.net was a media sponsor.

The Fiesta also featured a community health fair where around 60 volunteer medical professionals for the Bayanihan Clinic Without Walls offered free curbside consultations and medical services.

The Philippine Consulate General in Honolulu, participated as one of the 20 booths at the Philippine Cultural Village. Personnel from the Consulate handed out consular forms, tourism and trade materials to interested individuals. They also promoted the 9th Ambassadors, Consuls General and Tourism Directors Tour (ACGTDT) and encouraged the booth’s visitors to register for the 2016 Philippine National Elections.

The Flores de Mayo festival culminated with a colorful Santacruzan Parade where beautifully costumed reynas and princesas and their escorts representing Biblical characters paraded under flower-decked arches to commemorate the finding of the Holy Cross by Queen Helena, mother of Constantine the Great. This year’s Reyna Elena is outgoing Miss Hawaii Filipina, Erika Joy Ordoñez.

The Filipino Fiesta began 22 years ago when L&L Drive Inn founder Eddie Flores initiated the celebration as part of the awareness campaign to solicit support for the building of the Filipino Community Center. It has since become Hawaii’s largest and most colorful showcase of Filipino culture with an annual attendance of nearly 10,000 people attending every year.

Spectators, participants and organizers credit the Fiesta’s popularity and longevity to its broad-based appeal and varied activities, and in view of the fact that Filipinos now comprise the largest ethnic group in Hawaii. (The Hawaii Consulate General contributed to this report.)