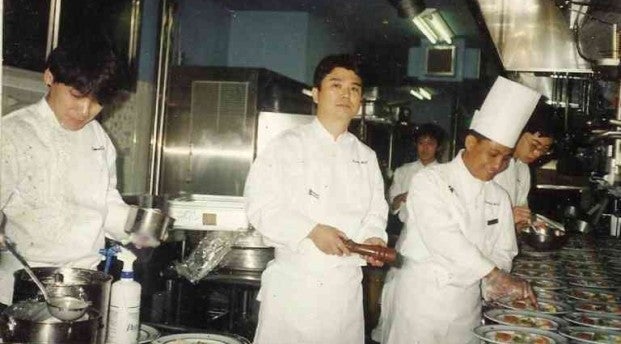 LOGRO with his Chinese colleagues in the palace kitchen. Contributed photo/GMA 7

With this funny antics, signature dance moves and “yumyumyum” recipes, Chef Pablo “Boy” Logro is now one of the most popular chefs on Philippine television.

Once upon a time, the “Kusina Master” of Philippine television served state leaders, kings and queens. A poor boy from a fishing village in Leyte, Chef Boy’s rags-to-riches story from a houseboy in Quiapo to the personal chef of the King of Oman is among the most inspiring overseas Pinoy stories.

In a palace with golden walls and crystal chandeliers, he led the kitchen with an international staff of around 300 to prepare 25 to 30 dishes for Oman Sultan Qaboos bin Said al-Said, while often preparing special menus for visiting world leaders—among them former American president George Bush, Sr., the late King Hussein bin Talal of Jordan, former president Hosni Mubarak of Egypt and the late Princess Diana of Wales. Former Philippine president Fidel Ramos was also one of the guests he served. The sultan also took him along on trips to Istanbul, Geneva, London and France, among others.

“Kung nasaan siya, naroon ako. (I accompanied him everywhere)” he said.  They rode in a royal yacht and were given “VIP treatment” everywhere they went.

The sultan, Logro said, provided him with a car and a two-storey house in a “Forbes Park-like neighborhood.”  His wife, Ernelinda, and children eventually came to live with him in Oman upon the sultan’s invitation.

“Who would have thought that an elementary graduate like me would have the chance to work for a king,” Chef Boy said in Filipino. “Pero Bisaya ako kaya mabilis akong matuto (But I am a Visayan that’s why I learn fast).”

His ability and willingness to learn and absorb as much as he could from other chefs would certainly count as a vital ingredient in his recipe for success.

As his story goes, he began as a child laborer. At 13, after a storm had wiped out his family’s coastal home, he was sent off to Manila to work as a houseboy. He cleaned three floors in Quiapo, washed all the dishes, then was still required to help mix dough to make siopao (Chinese meat-filled buns) and siomai (dumplings) for the owner’s restaurant on the ground floor. In time he became an expert dough maker.

In 1975, he applied as a cook in Astral Villa Restaurant in Makati, but due to lack of credentials, he was offered the job of dishwasher. He put up with a lot to be able to continue learning. The chefs threw the pans at him after they cooked, he recalled. To avoid getting hurt, he practiced catching the pans.

Logro tasted leftovers, asked the chefs for the recipes and listed down the ingredients in his little notebook.

Eventually, the restaurant’s Argentinean executive chef, Antonio Cuadrado Perez, treated him as a “sidekick” or protégé. 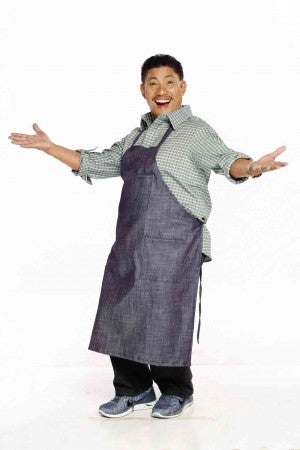 With his experience, he later got himself a job at the Bayview hotel in Ermita, where many overseas recruitment agencies were based.

On a tip from a friend that there was an opening for a sous-chef in Oman, he applied and made it to the sultan’s kitchen.  There, Chef Boy found himself in the company of chefs from India, Pakistan, Sri Lanka, Egypt, Thailand, Morocco, France, Britain, Bangladesh China, Japan and Korea.

He made it a habit to roam around the kitchen to ask everyone: “What did you prepare?”

Logro discovered that the Indian chef used generous amounts of turmeric instead of prepared curry powder making the aroma of his food more enticing.”

He learned Omani dishes, too, by observing how the Arab cooks did it.

“I absorbed every knowledge I could gain in the palace kitchen. That’s how I learned.”

He became an expert in cooking Omani dishes like Kabuli (rice dish), bamia (okra stew) and Kofta. Shish kebab became one of his own favorite foods.

There’s a similar dish to lechon in Oman which they called “Miswi,” he said. But instead of a pig, they roast goat in an oven. “Walang balat. Malambot. Masarap! (The goat’s skin is peeled off. It’s soft and delicious),” he described the Omani dish.

For his part, as the Philippine chef in the palace, he introduced Filipino dishes like “lamb adobo,” which also became one of the sultan’s favorites. He adapted and served the Philippine lumpia (spring roll) using middle eastern ingredients.

One day, he created an appetizer with avocado, shrimp and grapefruit that would become his ticket to his coveted position.  Logro said he was able to create his “Avocat et crevettes,” a cold hors d’oeuvre, by reading French menus and observing the British and French chefs in the palace. It was also inspired by his memories of the sweet Philippine pomelo.

It pleased the sultan. He was almost instantly promoted.  “Effective today, Chef Boy will make every meal. And every dinner, he must make this kind of food,” he recalled the king’s order.

Perhaps it was a stroke of luck or an answered prayer that the king loved his dish, Chef Boy said. But it was also a product of hard work and diligence, surely another ingredient in his success recipe.

“Masipag ako (I am diligent),” he said. He would come to the kitchen early and work late so he could practice cooking and work on some new recipes.

In his new position, he supervised many Omani assistants.

In the beginning, his Omani assistants used to belittle him, he said. But by treating them as “barkada (friends),” learning their language and showing them that they could learn from him, they “learned to love me.” 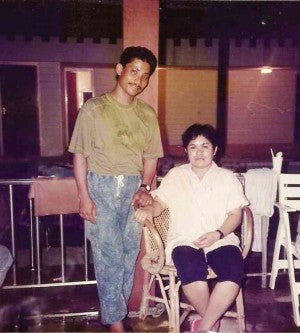 “If you are a good leader, your subordinates become good followers,” he said.
His own take is that his main ingredient to success, was “people.”

“Without people, I am nothing,” Logro said. “They are the ones who push me up.”

Aside from cooking, Logro mastered the art of bringing food to dignitaries from the French maître d’.

With a slightly inclined posture, head up and his left hand on his back, he recalled asking the Princess Diana, “What would you like to have tomorrow?” Logro said the princess was beautiful and kind. “Of course, it’s intimidating but I am not shy. I have to push myself because this is my career. Bakit ako mahihiya? (Why should I be ashamed?),” he said.

Logro considered his experiences in Oman as “parang ginto (like gold).” But serving the king would have not been possible, he figured, if not for his humble beginnings where he learned obedience, hard work and discipline.

Chef Boy ended his contract after 10 years.  The training he had in Oman and the multiracial kitchen staff that introduced him to the world’s best dishes helped him become the first Filipino executive chef of a five-star hotel in Manila.

As executive chef he earned P350,000 a month, he intimated. But he eventually left his job and put up a culinary school in Cavite.

He has also started building a culinary university on the land he acquired in Davao to give those in the province and nearby war-torn areas a chance to develop their cooking chops without having to leave their hometown.

Three of his children are now chefs while his youngest is taking up hotel and restaurant management. In his spare time, he enjoys travelling with his wife.
“What a beautiful life,” he said. And his recipe, he concluded, is really no secret—an ample amount of confidence, a stroke of luck, enough courage, hard work, dedication and a strong belief in God.