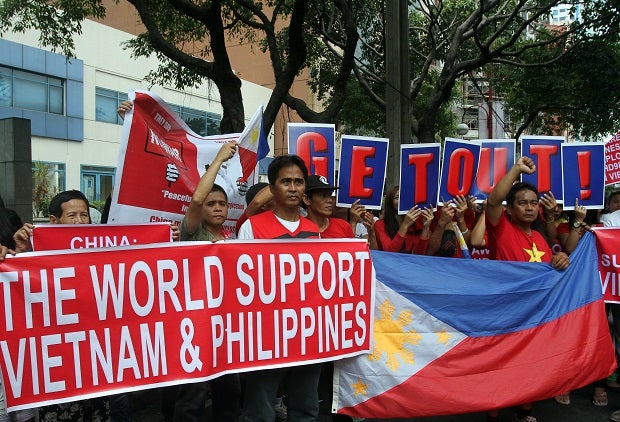 Vietnamese expatriates and Filipinos display placards as they join together in a rally in front of the Chinese Consulate at the financial district of Makati city to protest the recent moves by China to construct an oil rig near the Vietnamese-claimed Paracels off the contested Spratlys group of islands and shoals in the South China Sea Friday, May 16, 2014. The protesters, led by Philippine Congressman Walden Bello, claimed that Vietnam and the Philippines are “natural allies as both countries suffered the same territorial struggles against China.” JOAN BONDOC

Aquino and the Vietnamese premier will touch on the sea dispute with China during their meeting on the sidelines of the WEF which Manila will host for the first time, Malacañang said.

“It will be probable [that they discuss it] given that’s the current issue in their country,” deputy presidential spokesperson Abigail Valte said over State-run dzRB.

Vietnam is now locked in a tense standoff with China over the installation of an oil rig by China’s state-owned oil company in contested waters within Vietnam’s exclusive economic zone.

China’s action has set off violent riots against factories with Chinese links across Vietnam that had left some people dead, and others hurt.

In Manila, Filipinos joined Vietnamese in Friday’s protest rally in front of the Chinese consular office in the financial district of Makati.

The Philippines this week protested China’s construction of an airstrip on Mabini Reef within the Kalayaan Island Group in the West Philippine Sea.

Vietnam and the Philippines raised China’s incursions in the South China at last weekend’s summit of the Association of Southeast Asian Nations in Nay Pyi Taw, Burma.

China is claiming 90 percent of the 1.35-million-square-mile South China Sea, while the Philippines, Vietnam, Malaysia and Brunei, and non-Asean member Taiwan claim parts of it.

China is not sending a representative to the WEF summit that will gather 600 leaders from business, government, civil society and the academe from more than 30 countries.

The three-day summit, which begins Wednesday in Makati, will tackle the plan to create by 2015 an integrated Asean (Association of Southeast Asian Nations) Economic Community, as well as economic issues affecting the region, among others.

Aquino will give the keynote address.

“Our security preparations are also in place, and are now ongoing,” Valte said, referring to over-all security plan by the Philippine National Police. With a report from INQUIRER.net