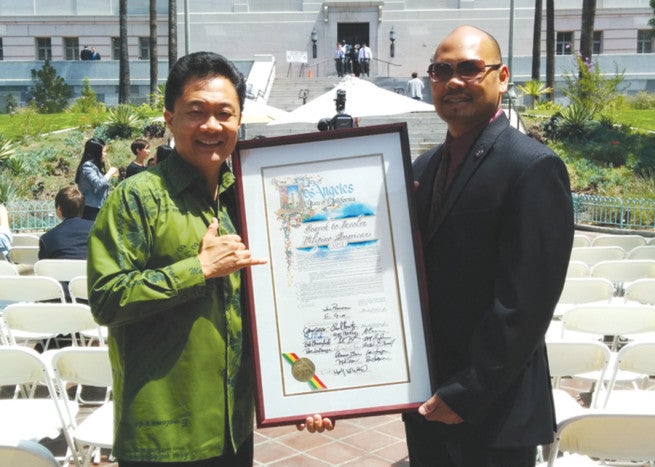 LOS ANGELES – A Filipino-American community organization was among the groups and individuals honored by the city government for their service, not just to their respective communities, but also to the City of LA as a whole, as officials marked Asian American Pacific Islanders (AAPI) Heritage Month May 9 at Los Angeles City Hall.

Search to Involve Pilipino Americans (SIPA), along with other AAPI community leaders, personalities and groups, were given service and leadership awards during a special city council meeting in City Hall. LA City Mayor Eric Garcetti and CD 15 Councilmember Joe Buscaino presented the awards.

Executive Director Joel Jacinto represented SIPA at the ceremonies. “I’m truly honored and humbled to accept it on behalf of our organization, those we serve, our staff, and the entire Filipino community,” said Jacinto, who was appointed to the city’s affordable housing commission in February.

Jacinto dedicated the award to the Delano Manongs, the Filipino leaders who spearheaded the Delano Grape Strike in the 1960s. Jacinto later told Asian Journal that he honored the Filipino leaders like Larry Itliong, Philip Vera Cruz, Andy Imutan and Pete Velasco because he “felt that it’s important for us to recognize the struggles and the heroism” of the Delano Manongs. He said the Manongs worked with Mexican labor leaders to form the United Farmworkers Movement in pursuit of a better life for their community.

Filipino-American Melissa Ramoso, senior deputy and API community liaison for the Office of State Senator Ted Lieu, said that she was thrilled and proud to hear Jacinto honor the Delano Manongs with the service award.

She praised Jacinto for the humility he displayed in honoring the Filipino labor leaders and for using the opportunity to “educate or remind” City Hall of the Filipino community’s history.

“You have to take every opportunity that is given to you — especially when you have the eyes and ears of our elected officials — to educate or remind them of our community’s history. Without the Delano Manongs, there [will be] no leaders like Joel, SIPA, or us,” Ramoso said. She added that she couldn’t have been more proud of Jacinto, than at that “very moment.”

Jacinto said that while the recognition for SIPA’s work “is always nice to have,” it’s not the motivation to do what they do. “We exist to serve the people. We exist to enrich generations of Filipino Americans, and other communities too, through our programs and services.” Jacinto said.

He said that the recognition by City Hall empowers and further galvanizes the identity of the Filipino community in LA, because it showed that the government does see how much contribution a Filipino organization has made to the city.

While the award for SIPA was noteworthy, the organization (and all nonprofits in general) could use a little more help from City Hall, other than simply recognizing their work. SIPA’s success in better serving the city lies the development of their proposed mixed-use affordable housing project, Jacinto said. But in order to push through, SIPA needs to raise funds to bankroll the project.

However, Jacinto indicated that due to cuts in the city budget, SIPA and other nonprofits have had a tough time getting financial backing from the local government. Jacinto said that the project would feature a community site that would enable SIPA to expand its scope of service to Angelenos.

The proposed affordable housing project and community center would not only transform SIPA as an organization, but also the entire West area of Historic Filipinotown, according to Jacinto.

While the financial hurdles pose a significant challenge, Jacinto remains optimistic, given the prospect of being able to extend more service to the city’s residents.

Jacinto said that SIPA understand that there’s a lack of finances in the political system, and his message to City Hall is, “We’re all in this together.”

“What we’re asking of our local government is to not forget, not to marginalize, and not [to fail to] address the needs and services of the Filipino community,” Jacinto said.

“We have socio-economic needs that have to be addressed. So we’re asking the city to be inclusive of the Filipino-American agenda, along with everybody else, along with the diverse community of Los Angeles, and keep everybody moving forward.”

SIPA kicks off another year of service with benefit gala

Fil-Am nonprofit in LA raises $130K in one night