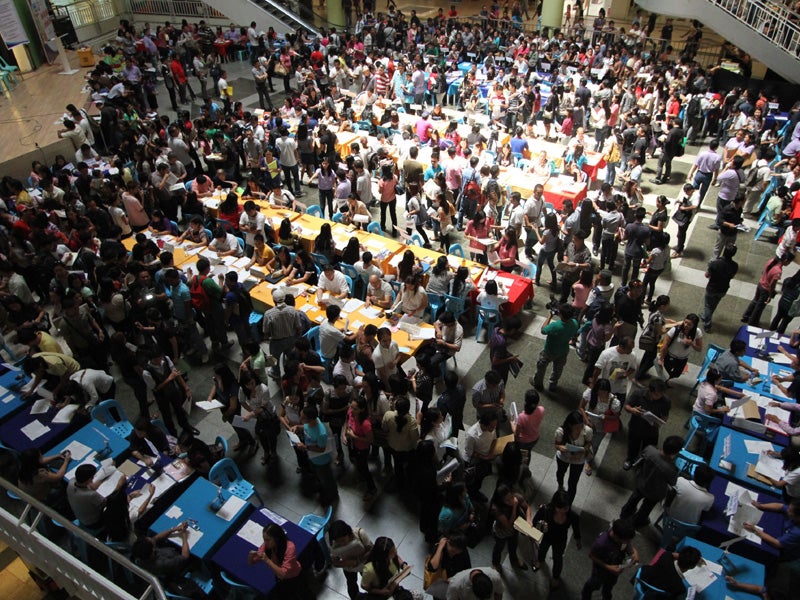 A typical scene at a job fair in the Philippines. INQUIRER FILE PHOTO

MANILA, Philippines—The Philippines may lose an even bigger chunk of its skilled labor force to neighbors in Association of Southeast Asian Nations, where workers get paid better when the region’s economic integration goes on full swing at end-2015, according to the Employers’ Confederation of the Philippines (Ecop).

To retain more professionals in the country and ensure that employees gain higher-value skills, additional brick-and-mortal investments should be attracted to widen employment opportunities while improving the quality of education and training of future entrants to the workforce, experts told participants of the 35th National Conference of Employers.

Ecop president Edgardo G. Lacson told the conference that the impending Asean economic integration would put in place a free flow of services and more open migration of skilled labor, which would present opportunities to Filipino workers and also challenges to the domestic economy.

“Our workers are ready (for Asean integration), as it is now, Filipino workers are valued all over the world,” he said, noting that about 10 million Filipinos are scattered globally.

Philippine Overseas Employment Administration (POEA) administrator Hans Leo J. Cacdac told the conference that Indonesia has been looking for additional teachers, while Malaysia has been short on workers. In line with the Asean economic integration, Thailand will open six more professions—accountants, architects, dentists, doctors, engineers, and surveyors.  Vietnam, meanwhile, is ramping up infrastructure development and up for grabs are more jobs for construction consultants, engineers, quality control experts, supervisors, and technical experts, as well as teachers, according to Cacdac.

Up to 80 professions have already been liberalized across Asean, and there will be even more in the years to come.

An increased migration of professionals, however, would not augur well to an emerging economy like the Philippines, Lacson said.

“What may happen is that mostly unskilled workers would be left in the country,” he said.

Lacson said the government could convince Filipino professionals to stay in the country and avoid brain drain if jobs were upgraded and compensation for workers were made competitive.

To do so, more investments should be lured in, but only if prevailing, major investor concerns were addressed, such as the mismatch in skills of graduates, and the high cost of power, Lacson said.

The government must also ensure level-playing field in business and industries while keeping the minimum wage competitive, he added.

Creating jobs in industry, manufacturing and agriculture should be prioritized, according to Lacson.

Education and training would also be key to level up the skills of Filipino workers, Cacdac said in an interview.

Filipinos should be able to compete with their neighbors mostly in higher-value types of jobs, he said.

Cacdac noted that most vulnerable occupations in the opening up of industries all over Asean would be low-skilled workers, domestic workers and entertainers.

He said less-skilled labor should be protected so foreigners would not have to snatch jobs from Filipinos.