Binay: OFW in Saudi not kidnapped but nabbed by cops 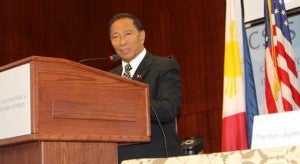 MANILA, Philippines—A Filipino in Saudi Arabia who was believed to have been kidnapped is actually in the custody of local police, Vice President Jejomar Binay said Wednesday.

“I was told by [Philippine Embassy in Saudi Arabia] Vice Consul Redentor Genotiva that Mr. Billy Joseph Enriquez was taken by the police and that his case is still under investigation by the Prosecutor’s Office,” Binay said in a statement.

Enriquez’s parents previously sought the help of Binay after his co-workers in a restaurant in Rakah Alkhobar told them of an incident where armed men took their son.

The incident took place on May 8, 2014 and heard nothing else about their son since.

Binay, the Presidential Adviser on Overseas Filipino Workers concerns, was able to contact the Philippine Embassy in Riyadh and embassy officials said they were able to personally meet Billy Joseph.

Vice Consul Genotiva reported to Binay that Philippine Embassy officials are already conducting an investigation on the case of Billy Joseph.

His parents were relieved to learn of the status of their son and asked Binay to extend the necessary assistance to their son.

“The government should take whatever steps are needed to address the needs of our OFWs. I encourage our kababayans working abroad to report any of their concerns to the embassies involved,” Binay said.