• Event honors all veterans of the US Armed Forces 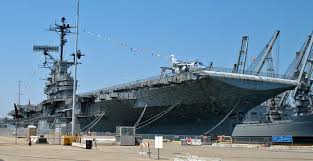 The annual event recognizes and honors past and present veterans of the U.S. Armed Forces and is open to the public.

All activities take place aboard the Hornet, berthed at 707 W. Hornet Ave., Pier 3, in Alameda. Admission is $16 for adults, $13 with Military I.D., and $7 for kids. All proceeds go to the USS Hornet Museum.

The formal Memorial Day Service begins at 1 p.m. and will be led by retired U.S. Navy Cmdr, Chaplain John Berger. The service will include an invocation, a wreath-tossing ceremony from the ship and a military parade.

Prior to the ceremony, beginning at 11 a.m., there will be a musical performance by The Hornet Band–The Young American Patriots Fife & Drum Corps, and a Presentation of Colors by the Boy Scouts of America.

The featured speaker will be Gregory Crouch, author of the book, China’s Wings. Crouch will talk about the Hornet’s role in the famous Doolittle Raid of World War II and pay homage to China’s assistance and sacrifices.

Following the Doolittle Raid, most of the B-25 crews that came down in China eventually made it to safety, due to the help of Chinese civilians.

However, the Chinese paid dearly, as the Japanese killed an estimated 250,000 civilians in retaliation. The author will also be available to sign copies of his book.

A special guest is Moon Chin of Belmont, California, a former military officer, retired airlines captain and one of the most decorated civilian pilots by the U.S. military.

During WWII, Chin rescued many U.S. military personnel and civilians fleeing the Japanese advance in China. In 1942, he evacuated Lt. Colonel James Doolittle from China immediately following his famous bombing raid on Tokyo, which had been launched from the USS Hornet CV-8.

Chin will be celebrating his 101st birthday aboard the Hornet on May 26th.  For more information on Capt. Chin, please visit: http://www.aaap-sg.net/archive/Mini-Bio%20MFChin.pdf

“We extend a special invitation to all veterans and their families to join us as we honor the brave men and women who have unselfishly defended our country, especially those who made the ultimate sacrifice and gave their lives defending our nation’s freedom,” said USS Hornet Museum CEO and U.S. Navy Captain Randall Ramian, Supply Corps, United States Navy Reserve. “This is the 14th year that we have the honor of hosting this meaningful event.”

Guests of the Hornet’s Memorial Day event can also take advantage of featured local food and beverage items that will be available for purchase. Notable Bay Area vendors will include Golnazar Gourmet Ice Cream; Joe’s Grill food station and BBQ; and Brewermaster Ian Schubro of Schubro’s Brewery, who will present a variety of ales. Schubro is a Navy veteran who served in multiple Iraq and Kosovo campaigns onboard the USS Theodore Roosevelt (CVN-71) and USS Blue Ridge (LCC-19).

Before and after the ceremony, Hornet visitors are also invited to take full advantage of Living Ship Day aboard the carrier. Visitors can explore the many decks of the ship, from the Captain’s Bridge to the Engine Room. Exhibits include 13 Navy and Marine aircraft, ranging from WWII vintage to modern era, and the West Coast’s largest Apollo Moon Mission display.