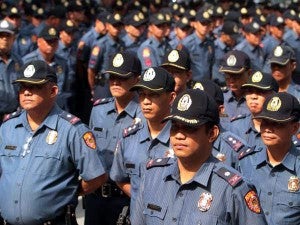 MANILA, Philippines—As the Philippine National Police (PNP) hosts the 34th Aseanapol conference for the fifth time, the PNP laid out its security preparations for the May 12-16 event on Thursday.

Chief Superintendent Ferdinand Yuzon, PNP Directorate for Plans executive officer, detailed in a presentation that about 2,000 policemen would be deployed to secure the four-day conference, which about 250 police delegates worldwide, are expected to attend.

In preparation for the international conference, Yuzon said the government has allotted “a total of P40 million for the corresponding expenses.”

The conference of police chiefs in Asia will be held at the Sofitel Philippine Place in Manila.

The theme of this year’s conference will be “Forging Strong Partnership for Peace, Security and Progress.”

The police official said the 34th year of the Aseanopol conference will serve as a “homecoming” for member nations as the association was founded in Manila on 1981.

The PNP last hosted the 23rd Aseanapol conference in 2003, making this the fifth time the Philippines host the annual event.

In a presentation read by Yuzon, he said the conference would further strengthen the ties among Asean police agencies for the “enhancement of mutual cooperation and collaboration.”

He also said that among the expected highlights during the conference would be the first ever formal hoisting of the Aseanapol flag and the celebration of a “Joint Communique” by the Chiefs of Police Agencies of the 10 Aseanapol countries.

President Benigno Aquino III is expected to speak before the 250 Aseanopol delegates on May 13.

The Aseanapol conference was first held in Manila on October of 1981 and former president Fidel V. Ramos hosted the conference in collaboration with Chiefs of Police of Indonesia, Malaysia, Singapore and Thailand. Hosting of the event is rotated among the participating countries. Jean Kyle Kelly