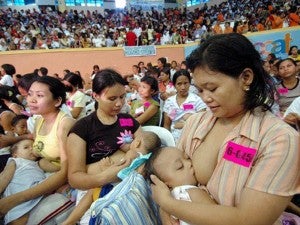 MANILA, Philippines—An international child health advocacy group has urged members of the House of Representatives to oppose proposals to water down the country’s Milk Code—which advances breastfeeding over the use of milk formula—adding that breastfeeding is proven to be effective in preventing deaths of children under five years old.

At a forum on Wednesday in Quezon City, the World Vision Development Foundation Inc maintained that malnutrition has remained the biggest underlying cause of child deaths, which can be prevented through the promotion of breast milk over infant formulas.

During Wednesday’s forum, the culmination of the group’s global week of action for its “Child Health Now” campaign, World Vision submitted a petition with some 7,500 signatures calling on senators and members of the lower house of Congress to defend the Milk Code or Executive Order 51 (EO 51).

The Milk Code is a law that ensures safe and adequate nutrition for infants through the promotion of breastfeeding and the regulation of promotion and distribution of artificial milk formulas and other similar products.

“We call on you to be steadfast in saying no to amendment attempts to the Milk Code as these will undermine breastfeeding practice… The Milk Code does not need amendments, instead, there should be a consolidated, stronger will to enforce it. We reiterate our call on you, our legislators at the Senate and the House of Representatives, to do your due diligence to oppose any effort to amend the Milk Code,” the petition states.

It further said, “As duty bearers and stewards of the State, you owe it to your people, especially the helpless under five children, to protect and promote their nurturance from which may depend their very survival.”

Child health advocates said breastfeeding could prevent the death of one in five children under five years old in developing countries.

World Vision submitted copies of the petition to Representatives Maria Lourdes Acosta-Alba, of Bukidnon’s 1st district; Ibarra Gutierrez III of the Akbayan partylist, vice-chair to the committee on the revision of laws; and Teodorico Haresco Jr of Aklan’s lone district and chair of the house committee on Milennium Development Goals.

Yvonette Duque, World Vision manager for the child well-being program, said in a statement that the local Milk Code has turned out to be among the best adaptations of the International Code on the marketing of breastmilk substitutes.

“Any attempt to amend EO 51 poses risk to the already existing Milk Code and so we propose for its full implementation rather than amendment so we can experience the full strength of this law that will redound to better child health,” she said.

For his part, World Vision executive director Josaias dela Cruz said that the topmost preventive measure against malnutrition is “optimal breastfeeding.” Dela Cruz added, “We really believe that mother’s milk is still best. This is what God intended it to be.”

He pointed out, “Malnutrition remains the biggest underlying cause of child deaths.”

“Rather than amendment, we call for stronger enforcement of the Milk Code with its Revised Implementing Rules and Regulations and we need strong political will to realize the full strength of the Milk Code,” he concluded.

Meanwhile, Dr. Anthony Calibo, the Department of Health’s Family Health Office, “Any attempt to water down or weaken the Milk Code in its natural state might really hamper our progress.”

Calibo said that deaths of children under five years old were usually caused by illnesses such as: pneumonia, diarrhea, and other health problems, that arise from malnutrition.

(With reports from Andrea Ocampo, trainee)